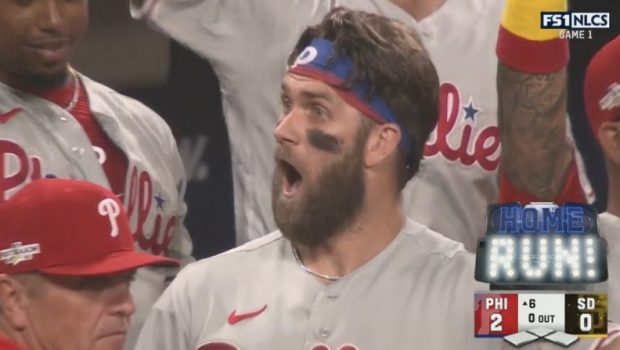 Kyle Schwarber crushed a baseball on Tuesday, helping to power the Phillies to victory over the Padres in Game 1 of the NLCS.

Schwarber did his damage off of Padres right-hander Yu Darvish in the sixth inning — demolishing a first pitch cutter for a gargantuan 488-foot (119.7 mph EV) blast.

According to Sarah Langs of MLB.com, it was the second-longest home run since Statcast started tracking in 2015, the hardest homer in postseason ball during the Statcast era and the longest home run hit at Petco Park during that same span.

His impressive blast increased the Phillies advantage to 2-0. Schwarber also singled and drew a walk in the contest, finishing the night 2-for-3. He’s now hitting .130/.290/.261 with one homer and three RBI this postseason.