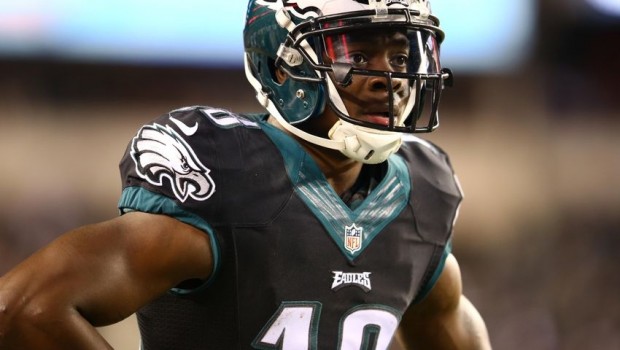 HERE’S WHAT AN EXPERT THINKS OF EAGLE FREE AGENT MACLIN

If there is one meme that has developed since the Eagles season ended late last December, it is:

The Birds have to sign Jeremy Maclin, who delivered a first-rate season after coming back from ACL surgery.

One problem: He will be a free agent and he may want to test the waters come March 10, when the free agent season opens officially.

One-liner: Maclin bet on himself after a 2013 ACL injury, turning down a five-year contract offer in favor of a one-year deal for what turned out to be an 85-catch, 10-touchdown season.

Williamson’s report: “Maclin is a tough one. I wouldn’t be super-excited about investing in him. He’s a good player but not great. He’s not a pure speed guy, but he’s fast. He’s not a ‘possession guy,’ but he can move the chains. But the way free agency works is that he’s ultimately a No. 2 wideout who’ll probably have a chance to be paid like a No. 1. He’s a player everyone wants, and if you could put him across from Larry Fitzgerald or Andre Johnson in their primes, then now you’re talking. If you have Andre Holmes on other side, well, he’ll be a different guy.”

Stat to note: Maclin was a workhorse in his first year back from the ACL injury. He participated in 980 offensive snaps, fourth most among NFL receivers, and was targeted 142 times — the eighth-highest mark in the league.