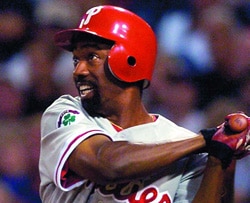 An excerpt from his op-ed piece in today’s New York Times:

Even as a kid, I learned to be afraid of Boston and the Red Sox, and when I thought I would be traded to them, I was worried. At the time, I had very little evidence to counter my feelings.

As it happened, I went to Philadelphia, not Boston. In recent years I’ve run into the Red Sox general manager of that era, Dan Duquette (ironically, now the G.M. of the Orioles — Adam Jones’ team), and he mentioned how close he’d been to trading for me in 1997. But I never told him of my concern at the time. If I had been traded to Boston, would I have tried to veto it like Curt Flood, who rejected his trade to Philadelphia and refused to go? I wondered if I understood that it would have ended my career before it started, without even giving the city and the team a chance.

The city’s reputation certainly was something I thought about in 1999 when I was on the Phillies and in Boston for a series. On three successive days my brother and I went out to eat — or tried to. At each place the host or hostess treated us rudely, if bothering to greet us at all. I could not recall having had that kind of dining experience in-season anywhere else at that point in my major league career. Is it possible I happened to pick three restaurants in a row where the staff was just having a bad day? Maybe.

In the end, it is not about just Adam Jones, or Boston, or overt racism, or “a few bad apples.” There are larger implications and even better lessons. Many people in our country experience a version of racial animosity, sometimes routinely. It is important to recognize that a vast majority of Boston fans categorically rejected that kind of racist rhetoric. My great Fenway experiences as a player and as an announcer are part of the evidence, too.