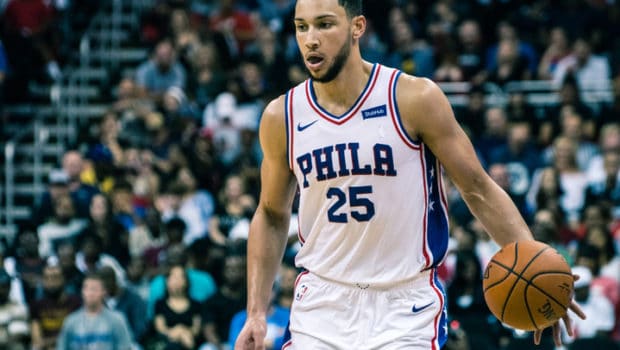 HERE’S WHY EVEN ESPN IS ROOTING FOR SIXERS — THEY’RE FUN!

The Sixers are two nights away from starting the 2017-18 season in Washington, so let’s clear away all the hype and hoop-la and get as real as ESPN has with this priceless passage:

The eighth spot will likely come down to Detroit and Philly. We’re all rooting for the Sixers, right? They are much more fun. Ben Simmons (above) is so fast in transition, it’s almost jarring given his size. Simmons is a freaking beast. He hasn’t played one game, and it’s already clear he’s an elite passer.

If Philly makes the playoffs, it will mean that Joel Embiid played a healthy number of games — at least 50, and probably more. When Embiid plays, the Sixers are good. They outscored opponents with Embiid on the floor last season, when nobodies were playing minutes that will now go to Simmons, J.J. Redick,Markelle Fultz and Jerryd Bayless. (Scoff at Bayless, but he’s going to close a lot of games.)

Philly is almost deep! There will be a legitimate battle royale (with cheese) for minutes between Justin Anderson, Furkan Korkmaz and Sauce Castillo! EvenJahlil Okafor looks spry, pumping his trade value before the Sixers dump him to Chicago or Phoenix.

Simmons’ versatility opens up so many weird lineup combinations. Want to go super big? Trot out Bayless (or Fultz), Robert “Bob” Covington, Simmons, Dario Saric and Embiid. Simmons alone is going to instill matchup panic. He will likely guard power forwards so Covington can envelope wings, but opponents won’t want their power forwards stuck on him.

Still: This team isn’t ready to hit .500 without a lot of Embiid. If he doesn’t play enough, they fall short. It will take time for Fultz, Simmons and Embiid to learn how to split creative duties.

The triple matchups rotate along a five-year matrix set years ahead. The NBA couldn’t have tweaked it this once, just for fun?