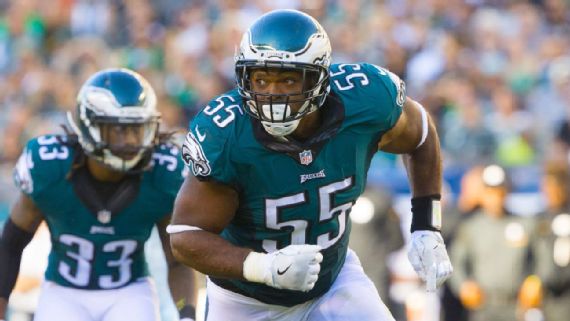 The word is that the Eagles are working to make primo edge rusher Brandon Graham a very rich young man.

Graham has been thriving in the attacking 4-3 scheme Jim Schwartz installed once he was named defensive coordinator in 2016. His 83 quarterback pressures last season were the third most in the NFL, according to Pro Football Focus. One of the two players Graham trailed was Giants defensive end Olivier Vernon, who signed a five-year, $85 million contract containing $52.5 million of guarantees in 2016. Graham already has a career-high seven sacks this season.

Graham is playing on a contract that was adjusted in the preseason, when $1.5 million of performance bonuses were added. Graham earned a $250,000 incentive and a raised his 2018 base salary from $6.5 million to $6.75 million when he got his seventh sack. Reaching nine sacks, making the Pro Bowl, or being named first- or second-team All-NFL will bring his incentive total to $500,000. Graham’s 2018 base salary can escalate another $250,000 with nine sacks. Twelve sacks would increase it an additional $250,000. A Pro Bowl selection or All-NFL honors would also add $250,000 to his 2018 base salary.