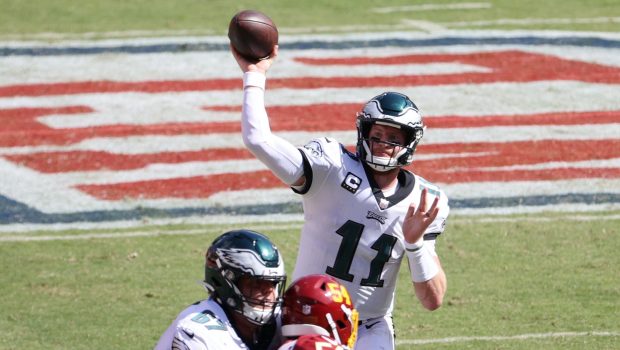 EAGLES PEDERSON ON THE DISASTER IN DC: WE GOTTA’ DO BETTER!

So, the Eagles looked like Supe contenders in the first half.

And Supe pretenders in the second half as Washington whipped them up one side of Carson Wentz’s head and back down the other.

So, coach Doug Pederson, what do you have to says for yourself on WIP this morning?

How do you explain Carson Wentz going 12-15 for 176 yards, two touchdowns, and no turnovers. The Eagles were leading 17-0.

But he finished the game with just 270 yards passing, those two early touchdowns, two interceptions, one fumble, and was sacked eight times in route to an incredibly disappointing 27-17 Week 1 loss.

“A lot of disappointment,” Pederson told Angelo Cataldi and the 94WIP Morning Show during his weekly 8am Monday call-in.

“I watched the game on my iPad coming back and it was about how I felt after the game, I kind of a tale of two halves. To score points on three out of your first four drives and defense to play the way they were playing, and then the offense to sort of just self-destruct in the second half, it’s disheartening. It’s disappointing because we’re better than that. We’ve got good players on this roster and good players in key positions that we just didn’t — all around. I point the finger at me too, and it starts there, but we have to do better.”

Pederson, of course, is facing plenty of criticism himself, specifically for his potentially over-aggressive play calling.

With under two minutes to go in the first half, the Eagles had the ball on their 28 yard line with a 17-0 lead and Pederson decided to stay aggressive, calling a pass play on first down. Wentz’s intended pass to rookie Jalen Reagor was picked off and Washington went down the field to make it a 17-7 game before the half.

“No, not at all,” Pederson told Cataldi when asked if he would change anything. “This is what people have to understand. In this league, I don’t care if it’s 17-0, 20-0 — 17 points in this league is not a win and by no means am I going to sit on the ball and do any of that. I trust my guys and I put my guys in a position to be successful. It is unfortunate. It’s a costly mistake obviously and it wasn’t the only one, but I’m going to continue to put our guys in that position. I have got to show confidence in the guys, so I would definitely do that again. At the same time, I would maybe coach that play or coach the quarterback, coach the protection, whatever we have to do to make that play better.”