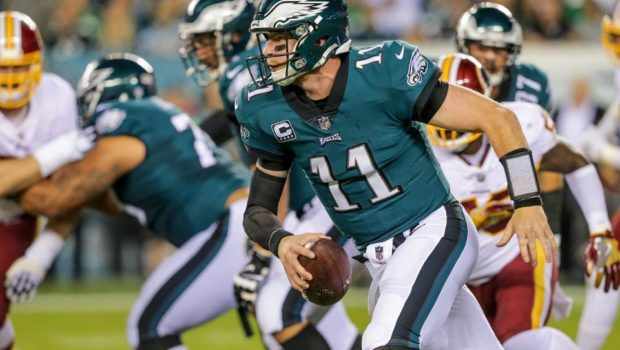 HERE’S WHY EAGLES HAVE A BIG EDGE OVER COWBOYS TONIGHT!

It seems so long ago because because so much has happened in Eagles World.

Carson Wentz and the Eagles started fast just as they did a year ago and have sustained it this time. Dak Prescott hasn’t quite found the formula that carried the Dallas Cowboys to the best record in the NFC when he and Wentz were fellow rookie quarterbacks in 2016.

Now Wentz has a chance to push his team to the brink of the NFC East title on Sunday night against the defending division champions.

Win tonight and the Eagles (8-1) would be four games up with six to play in pursuit of their first division title since 2013.

Meanwhile, the second-place Cowboys (5-4) would be scrambling for a playoff spot while facing four more games without suspended star running back Ezekiel Elliott, who paired with Prescott for remarkable rookie seasons in 2016 while Wentz and the Eagles faded from contention.

”Any time you’re playing a divisional rival it just seems there’s more riding on it just because division title’s the No. 1 goal,” said Wentz, the NFL leader with 23 touchdown passes . ”We definitely view this game as a big one, but at the same time it’s the next game.”

Prescott is without his friend and backfield mate, who decided this week not to pursue the legal battle and accept the remaining five games of his six-game suspension over alleged domestic violence. Elliott had a federal appeals court hearing scheduled Dec. 1, four games into the ban.

Byron Bell replaced the benched Green against the Falcons and is likely to start if Smith, a four-time Pro Bowler battling groin and back issues, can’t go.

Dallas is likely to be missing 2016 All-Pro linebacker Sean Lee as well with a recurring hamstring problem. The Cowboys lost both games Lee missed earlier this season, and struggled to stop Atlanta after he left in the first quarter.

”We know the importance of this rivalry especially when they’re playing the way that they’re playing, people counting us out or whatever you want us to say, people claiming them to be the best team,” Prescott said. ”We’re ready for it.”

Things to consider going into the 117th meeting between franchises that have claimed three of the past four NFC East titles:

The Eagles, tied with New Orleans for the longest active winning streak at seven games, have started 8-1 four other times. Twice they won the NFL championship, and the twice they reached the Super Bowl before losing. On the flip side, they’re coming off the bye a year after they went into the break at 3-0 and lost nine of the first 11 on the other side of it.

”It’s a fine line,” coach Doug Pederson said. ”But at the same time, when you’re on a little bit of a roll, you just want to continue to play. It was a good time for us. Now it’s just a matter of getting guys refocused.”

The Dallas running game wasn’t terrible without Elliott against the Falcons. Alfred Morris, a 1,600-yard rusher as a rookie in Washington five years ago, had 53 yards on 11 carries. But the Cowboys were too far behind in the fourth quarter for the ground game to be a factor. ”One game in is not going to be really enough of a sample size of where we are,” offensive coordinator Scott Linehan said.

Eagles CB Ronald Darby is expected to return after missing eight games because of a dislocated ankle sustained in the opener. Darby would return to his spot on the left side and Jalen Mills would move to the right side. His return should solidify a unit that has played well during his absence. Mills and nickel cornerback Patrick Robinson each have three interceptions.