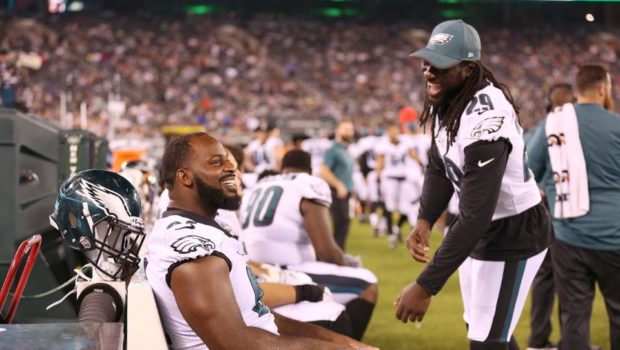 HERE’S WHY THE EAGLES, A 1-PT. FAVE, SHOULD SKUNK THE SKINS!

Only two days before the Eagles strap it on at Fed-Ex Field in Washington for the 2017 season opener:

So, you would think this is a game that has made the experts squirm.

The Eagles are seen to have an advantage over the Redskins, who have spent the offseason losing game-changing receivers and making their quarterback beg for money.

The Eagles should win, breaking the Redskins’ five-game streak over the Birds.

“Philly is kind of my sleeper team,” an ESPN insider reasons. “Their big thing is their corners, but Washington is not really going to scare you with their wide receivers, which helps Philly in this matchup. Really, it comes down to Carson Wentz taking care of the ball. That is something Kirk Cousins probably will do, but Philly, overall, there is some boom-or-bust potential where they could explode on both sides of the ball.”

Vegas has set win totals at 8.5 for the Eagles and 7.5 for the Redskins. Philly is seen as having upgraded significantly at wide receiver, with Washington regressing at the position while losing something when offensive coordinator Sean McVay departed.

“I don’t know who Washington throws the ball to,” another insider said. “Terrelle Pryor hasn’t really done a lot in the preseason. You lose young Sean McVay. I just think there is a lot going against you. I just think the only thing Washington has is Jordan Reed. I’m not sure what else they have that scares you.”

“The additions Philly has had in the passing game will help a second-year quarterback,” the third insider said. “I think the run game is just enough. They have enough pieces to do some things. Yeah, I’ll say Philly.”