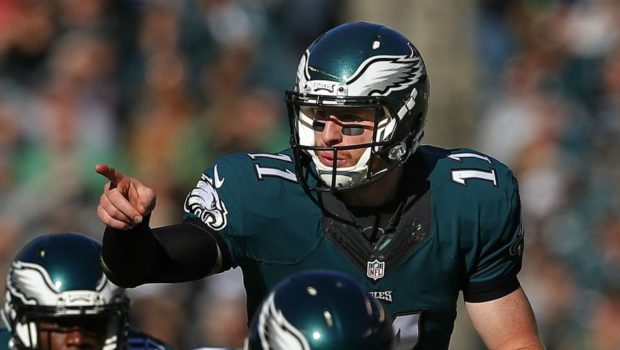 WHY EAGLE CARSON WENTZ WILL CLIMB ON FANTASY DRAFT BOARDS!

Carson Wentz opened his NFL career in 2016 with three straight wins, efficiently carving up the defenses of the Browns, Bears and Steelers.

In those three games, he completed 64.7 percent of his throws while averaging 256.3 yards per game and 7.54 per attempt. He tossed five touchdown passes and zero picks, posting a passer rating of 103.8. Wentz, in short, was terrific — a quick-thinking, mobile QB with plenty of arm. He certainly looked the part of a top-of-draft quarterback, a franchise cornerstone.

And then the calendar flipped to October. No one would have guessed it at the time, but Wentz’s best games were already behind him. Losses piled up, as did turnovers. Wentz was punished by the better defenses on Philadelphia’s schedule. Here’s a look at his month-by-month performance:

After Wentz’s early binge, he began a gradual descent toward mediocrity, and eventually to something worse. When all the numbers were in, he had nearly as many interceptions (14) as TD passes (16). He ranked near the bottom of the league in Y/A (6.23), behind guys like Case Keenum (6.84), Ryan Fitzpatrick(6.73) and Blake Bortles (6.25). Wentz completed a respectable 62.4 percent of his throws, but he averaged just 3.3 air yards per attempt, again ranking among the NFL’s sketchiest passers. (Keenum averaged 3.7, Osweiler 3.6 and Bortles 3.3).

Simply put, Wentz wasn’t good. We need to give him a partial pass because he was tossed into the fire as a first-year pro, but let’s also keep in mind that he wasn’t some 21-year-old kid. That excuse can fly for Jared Goff, but not Carson. In fact, Wentz is a year older than both Marcus Mariota and Jameis Winston. He’s only eight months younger than Bortles, a player entering his fourth year in the league. Wentz will turn 25 before the end of the 2017 season; we have to assume he’s closer to a finished product than other recently drafted QBs.

Wentz spent much of his offseason working on throwing mechanics and footwork, while the Eagles’ front office spent time and resources adding talent at the offensive skill spots. If Wentz can’t make a significant leap in his second NFL season, his supporting cast won’t be to blame.