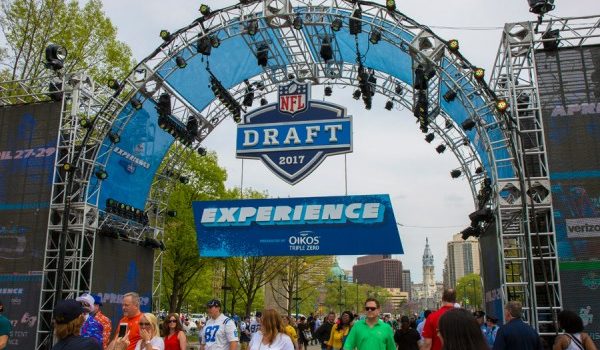 HERE’S WHY THE DRAFT HAS GIVEN EAGLES A LEG UP ON NFC EAST!

The just-completed NFL draft has given the Eagles a leg up on their NFC competition:

After devoting their free-agent resources to offense, the Eagles committed their draft capital to defense. Barnett gives theEagles one of the best pass rushers in the draft. He is a “Call of Duty” player — that is to say, he has exceptional hand-to-hand combat skills — with the potential to be a double-digit sack producer as a rookie. Jones isn’t expected to make a major contribution as a rookie, due to his lengthy recovery from a torn Achilles tendon suffered at his pro day in March. If he fully recovers, he gives the Eagles a Pro Bowl-caliber corner on the island. Hollins is a slick vertical pass catcher with A-plus skills as a special teams demon. He could blossom into an impact player in that underrated phase of the game. GRADE: A-

The Redskins scooped up a number of solid players by simply allowing the draft board to come to them. Allen was viewed as a top-five talent early in the pre-draft process, but dropped down boards due to possible concerns about his medical history. If he can move beyond his injury woes, Allen could serve as a nice complement to Ryan Kerrigan as a 5-technique pass rusher. Anderson is a backyard brawler with a rugged game on the edges. He isn’t a high-level pass rusher, but his non-stop motor will lead to a number of garbage-time sacks. Perine could take the RB1 job after coaches catch a glimpse of his hard-nosed running style in camp. GRADE: B+

The Cowboys entered the draft intent on upgrading their defense with a handful of blue-chip prospects possessing outstanding skills. Charlton is a classic “flasher” with the size, length and athleticism to excel. He needs to play with more energy, but the former Michigan standout gives the Cowboys a legitimate rusher off the edge. Awuzie is a blue-collar cover corner with outstanding instincts, awareness, ball skills and versatility. He should be capable of performing on the outside or in the slot in the Cowboys’ Tampa 2 scheme. Lewis is the best nickel corner in the draft, but he must resolve his legal situation. Switzer is a dynamic returner with the receiving skills to also thrive as a slot pass catcher. GRADE: B

The Giants added some more firepower to an offense that is brimming with talent on the perimeter, particularly at the pass-catcher spots. Engram is a Jordan Reed-like playmaker capable of playing “Y” or “H” in their scheme. He is the most polished route runner among the tight ends of the 2017 draft class. Webb is a quick-rhythm passer ideally suited for playing in the Giants’ small-ball scheme. Tomlinson is a space-eater with outstanding strength, power and hand skills. He plays with leverage and fills a void as a rock-solid run stopper. GRADE: B