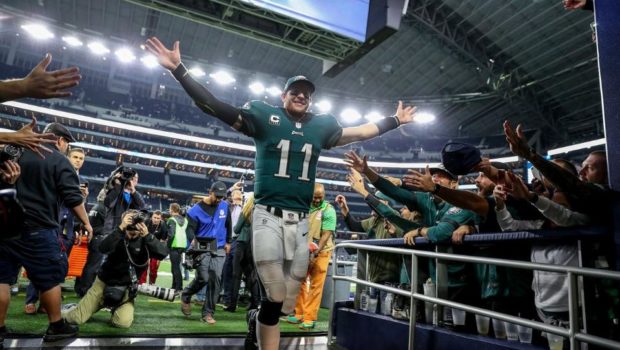 HERE’S THE CASE FOR THE EAGLES RUNNING THE TABLE TO 15-1!

Eagles Mania has swept the Philly region, and lots of national scribes have caught the fever.

Check out what the Boston Globe’s Ben Volin writes today:

Will the Eagles, Saints, or Vikings lose again? The 9-1 Eagles and 8-2 Saints have each won eight games in a row, and the 9-2 Vikings have won seven in a row.

The Eagles look like the class of the NFL, ranked in the top 10 in points scored, points allowed, total offense, and total defense.Carson Wentz has blossomed into a top MVP candidate in just his second NFL season, not only compiling great stats (25 touchdowns to five interceptions) but also displaying impressive toughness and leadership as his Eagles pile up blowout wins. Philly has tough games at the Seahawks and Rams on the docket, but otherwise look like a good bet for the No. 1 playoff seed.