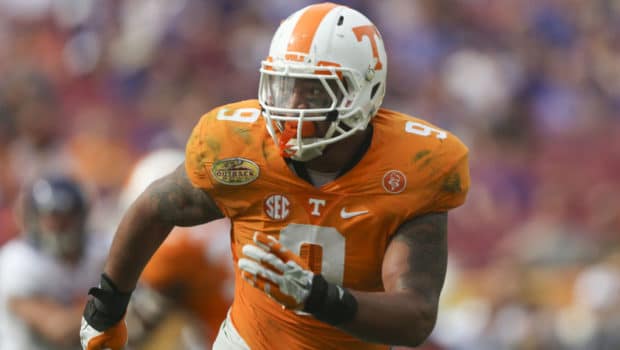 Anonymity is a status that allows NFL observers to flap their gums at will with no chance for a brush-back because they don;t disclose their names.

In other words, they are gutless!

Bob McGinn of the Milwaukee Journal Sentinel puts together a series of posts ranking draft prospects based on what he hears from anonymous scouts.

Here’s what some of them thought of the Eagles’ undrafted signees and picks, pre-draft:

Third-year junior started 36 of 39 games. “Interesting study,” said one scout. “Played down but outside backer for us. Great kid. Dirty tough. Has balance, agility, strength. I don’t know if he has enough length.” Arms were just 32 1/8 and he lacks speed. “Like him, but I just don’t see traits,” said a second scout. “He wins due to effort. I’ve been burned by those kinds of guys in the past so I’m a little bit gun-shy.” Finished with 197 tackles (52 for loss) and 33 sacks, two more than Reggie White’s school record. “Only wins from the edge,” a third scout said. “I don’t see any counter. I see special instincts to be able to time the snap and get off the ball. Average speed, average power.” From Nashville. “He’s ahead of everybody in know-how,” said a fourth scout. “He is a tremendous worker. You’re going to get something out of him. But I think the game’s going to catch up to him some on our level.”

It all changed for Jones when he blew out his Achilles running through drills at pro day in mid-March. “That’s a shame,” one scout said. “My guess (now) is third round. I think if teams have extra picks they might look at him earlier. If he has a negative it’s probably strength. For a lean guy he tackles well. Really a good cover guy.” Two teams said they had Jones slotted second behind Lattimore before the injury. “Good worker, willing to do extra,” a second scout said. “Really smart. Doesn’t get rattled. I question his long speed.” Third-year junior with 39 starts. Finished with 145 tackles, 9 picks and 30 PBUs. “More of a finesser,” said a third scout. “He can run and mirror anything. He wasn’t real physical with the jam. Not very big.” Added a fourth scout: “He’s 186, 4.51. There’s not a lot of special traits.” From Diamond Bar, Calif.

Counting bowl games, he finished third in all-time rushing behind Ron Dayne and Tony Dorsett. “Well, everybody’s going to have doubts on his size, and I do, too,” one scout said. “I’ve never seen a 178-pound guy never get hurt. That guy is hard to tackle. Ask that big pretty guy from UConn (safety Obi Melifonwu) about the Senior Bowl when he planted his helmet right in his chest and ran over his (expletive). Might be the toughest guy in the draft. I don’t know what you do with him but I’ll be surprised if he’s there in the fifth (round).” Carried a phenomenal 1,059 times for 6,405 (6.0) and 62 TDs to go with 99 receptions for 1,039. Wonderlic of 21. Just five reps on the bench. “He’s a midget but is he exciting,” a third scout said. From Las Vegas.

Blew out an ACL at Air Force in 2013. Opted out of the military, played two years of junior college and went 10-4 for the Hokies last season. “He’s raw but I love his presence,” said one scout. “Off the field he has a long, long ways to go as far as the football learning and background. He really should have stayed in school. He’s big and strong and athletic. You like that he went there and took over the job and had a damn good year.” Completed 63.5% for a rating of 105.1. “A real project,” a second scout said. “Probably the same type of arm strength and same type of athlete as DeShone Kizer, but Kizer is more advanced. He’s got a strong arm but he has no idea where he’s throwing the ball.” Wonderlic of 21. From Mansfield, Texas.

Former Australian Rules Football player from Geelong, Australia. Tutored by Nathan Chapman, a free-agent punter for the Packers in 2004 training camp. “Aussie,” said one coach. “They’re always more mature. Older. But he didn’t kick many regular NFL-type punts. When he went to the combine he was very impressive.” Four-year starter in a scramble-rollout scheme with a 44.9 average in 211 punts. “He was just doing what the coach (Urban Meyer) was telling him to do,” a second coach said. “My biggest question was, how was he in the pocket, the way we do it in the NFL? At the combine he impressed me. He’s got a big leg, he gets it off quick and he can hold.”