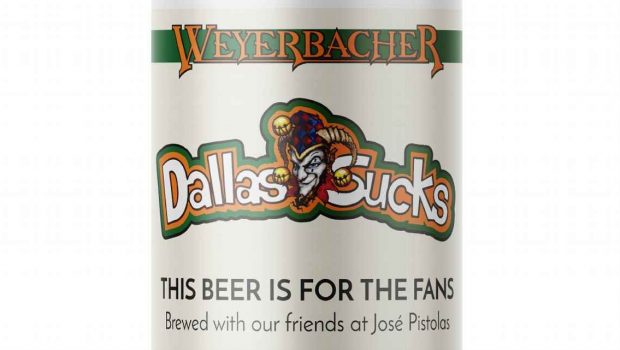 Why this name was chosen: Weyerbacher’s president, Josh Lampe, was hanging out at a bar in Philly called Jose Pistola’s to their point-of-sale system ditched the standard greeting (“Thank You”) and replaced it with the following message: “Dallas Sucks.” The bar’s owner, Casey Parker, was also a good friend. Lampe told him they should collaborate on a beer to capitalize on the Eagles’ unrelenting rivalry with the Cowboys. Six months later, they had one.

When it was brewed: Weyerbacher put it out in the beginning of the 2017 season — the Eagles’ Super Bowl-winning season. In the first year, Weyerbacher thought they would do 500, maybe 1,000 cases. They ended up doing 14,000 over three months. Now they brew it on a limited basis.

Key ingredients: Calypso, Centennial and Cascade hops (that will change with the 2019 version, which will be sold in 16-ounce cans)