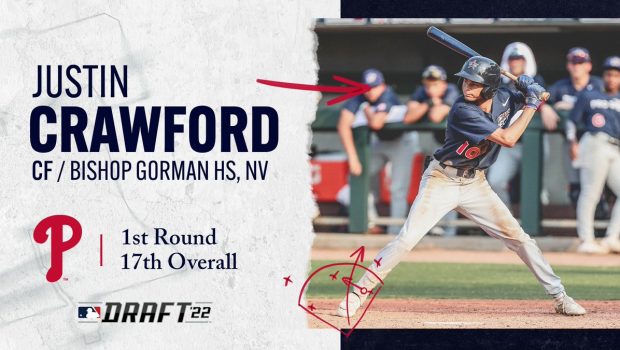 Here’s what The Athletic’s Keith Law thinks of the Phils top draft pick:

The Phillies indicated they weren’t going to take a high school pitcher in the first round for the third year in a row, and they didn’t, but they stuck to the same philosophy of accepting big risk for big upside.

Crawford is an 80 runner with bat speed, but physically underdeveloped, with most of his man strength ahead of him, and he needs to work on his defense in center beyond what he can do with his elite speed.

The Phillies’ system doesn’t have a lot of hitter upside right now, so he does give them something they lack.

The son of Carl Crawford — yes, Carl Crawford is old enough to have a son in the draft, and nothing in this draft year has made me feel any older than that one fact — is quite similar to his dad as a player.

He’s at least a 70 runner, with good bat speed, but not much present power or even hard contact yet, although his frame is very projectable and he could get to average power.

He sets up with an extremely wide stance, and strides about as far as he can, which may be why he has trouble adjusting to changing speeds.

He’s a better defender than Carl was and throws well enough to stay in centerfield. He has above-average regular upside, but may require more time in the minors than the typical first-round high school position player.