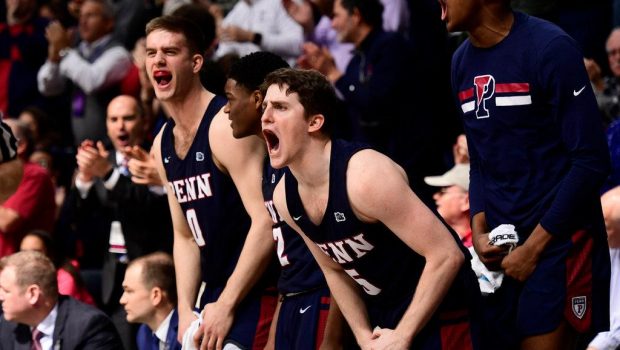 HERE’S HOW 16-SEED PENN CAN TAKE OUT 1-SEED KANSAS!

Ivy champ Penn is making its first appearance in the NCAA tournament since 2007, and as a 16-seed they are a deep underdog against No. 1 Kansas this Thursday in Wichita.

However, the New York Times thinks an upset may happen:

WHY IT WILL HAPPEN Deep breath on this one: It would be the first time a No. 16 beat a No. 1 in what will have been 132 contests. First, consider the imperfection of the No. 1: The Jayhawks are ninth according to KenPom.com, the equivalent of a No. 3 seed; they lag defensively; their average point differential was 21st, the same as fellow Big 12 member West Virginia (a No. 5 seed); and it is unclear how available injured big man Udoka Azubuike will be. Then there’s Penn: The Quakers won the Ivy League, which had a down year but is still a more formidable conference than No. 16s typically come from; are expert at defending the 3-pointer; and are coached by Steve Donahue, who took Cornell to the round of 16 several years ago.

X FACTOR Caleb Wood is a strong perimeter defender who takes care of the ball. He typically comes off the bench for Penn. Maybe he has earned more playing time for this one?