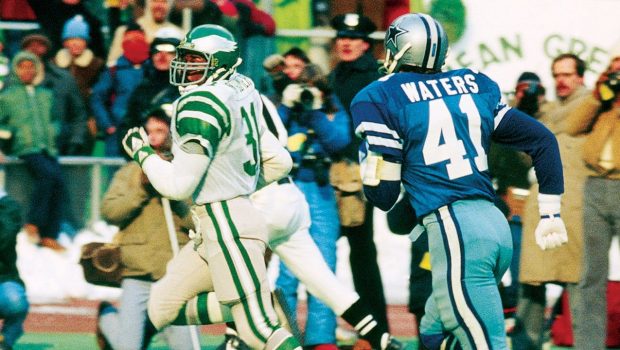 HERE ARE TOP 10 EAGLES-COWBOYS MOMENTS GOING BACK TO 1960!

The most memorable game between the two teams was the Eagles’ lone playoff victory over Dallas. It was on Jan. 11, 1981, as Philly was looking to defeat Dallas in the NFC Championship Game.

In front of a frenzied home crowd, the Eagles, one year after snapping their nine-game losing skid against the Cowboys, defeated Dallas 20-7 en route to their first Super Bowl appearance.

After running back Wilbert Montgomery started the game with a 42-yard score (above) , the Eagles, three weeks after losing to the Cowboys in their regular-season finale, scored 13 unanswered points in the second half. Montgomery would finish with 194 rushing yards on 26 carries, while Philadelphia’s defense held Dallas to just 206 total yards while forcing four turnovers.