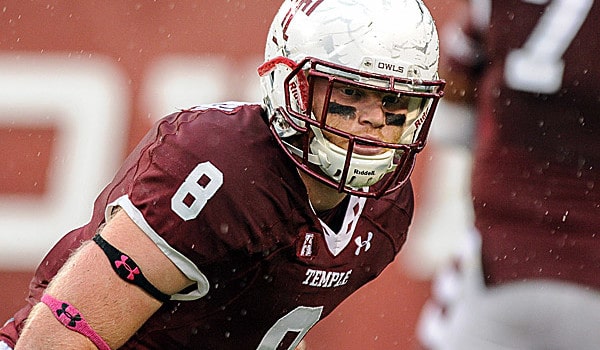 HERE ARE THE OWLS WHO FLEW HIGH TO STUN PENN STATE

By Matthew Cockayne, the Temple News

With just more than a minute left in the third quarter and the score tied at 10, junior defensive lineman Sharif Finch changed the game.

The 257-pound Henrico, Virginia native cut off an outside pass from Penn State quarterback Christian Hackenberg, and took the interception back to the Nittany Lion’s 2-yard line, electrifying the sold-out crowd at Lincoln Financial Field. It set up junior quarterback P.J. Walker’s one-yard rushing touchdown, the go-ahead score that led the Owls to a 27–10 victory.

“I thought [that play] was the game-changer,” Walker said. “You know, Sharif did a good job dropping. We might have brought a field blitz. I really didn’t watch it. All I know is that he was running down the sideline and I was like ‘Alright we good’.”

On Penn State’s first offensive play from scrimmage, Nittany Lions’ freshman wide receiver Brandon Polk took the handoff and busted outside on a sweep, racing down the right sideline for a 33-yard run.

Later in the drive, 4:13 into the first quarter, Penn State scored first on a 34-yard field goal from kicker Joey Julius.

The Owls’ offense struggled early on with one first down in their first four drives, but the team settled in on defense after its shaky start, recording three of the team’s 10 sacks and a forced fumble before the 11-minute mark in the second quarter.

“We had some three man sack rushes,” coach Matt Rhule said. “Nate D. [Smith} had a couple spin moves, Tyler [Matakevich] added on a couple times. … I thought a lot of guys did their job, but then a lot of guys won their one-on-ones to get us in those situations.”

The momentum shifted back to Penn State after a strip sack of Walker in Owls’ territory with 10:54 left in the half. However, Temple’s defense remained stout, forcing a three-and-out after a sack from Matakevich.

Late in the second quarter, the Owls finally found their way down the field on a 12-play, 93-yard drive, highlighted by junior running back Jahad Thomas, who escaped for a 31-yard rush deep in Nittany Lions’ territory.

The running back later capped off the drive with a one-yard touchdown on third-and-goal.

“A couple plays here and there, we were short by a yard or a foot,” redshirt-senior wide receiver John Christopher said. “It was so close. I mean we just weren’t worrying about the outcome of the situation. We just knew if we kept grinding and grinding we were going to get rolling, and that’s what happened.”

Despite a 10–7 halftime deficit for the Owls, their strong second quarter on offense and defense paved the way to a large advantage for first-half time of possession. Temple held the ball for more than 18 minutes in the first half, while Penn State had the ball for less than 12 minutes.

Temple came out strong in the second half on defense, forcing two straight Penn State punts, one of them after a three-and-out.

The Owls took the ensuing drive into Nittany Lions’ territory after a trick play that saw Christopher toss a 25-yard pass to Walker.

A holding penalty on the next play brought the Owls back 10 yards, but after a failed third down conversion, sophomore kicker Austin Jones split the uprights from 40 yards to tie the game at 10 with 6:23 left in the third quarter.

After Temple and Penn State traded possessions, Finch made the big play. Walker’s ensuing rush with one minute left in the third quarter put the Owls up by 17–10, and they did not look back.

Thomas’s second touchdown of the game, a 24-yard scamper five minutes later, and a 30-yard field goal with 5:59 left in regulation all but ended Penn State’s hopes for a comeback.

“This [win] will help us in recruiting, it will help us with everything. It just won’t help us if we lose next week,” Rhule said. … “We beat Maryland [38–7 in 2011] and we were feeling really good, and then Toledo came in here … and put it on us. That is the truest test of what kind of team we are, how we play next week.”

The Owls will travel to Ohio next week to play Cincinnati at 8 p.m. in their first American Athletic Conference opponent of the year.