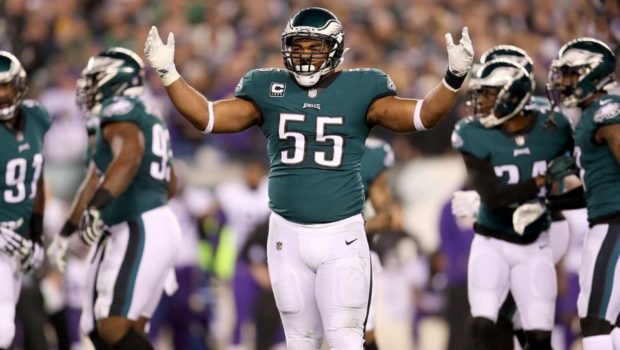 HERE ARE THE EAGLES WHO ARE UNABLE TO PRACTICE

The Eagles held their first training camp practice today and have announced the following players are unable to drill:

Brandon Graham, defensive end (above): Graham suffered a high-ankle sprain in the Christmas night game against Oakland and played with the injury through the Super Bowl. He had surgery shortly after the season ended. In the spring, Graham expressed confidence that he would be healthy in plenty of time for the 2018 regular season.

Alshon Jeffery, wide receiver: Jeffery played with a torn rotator cuff for much of the 2017 season and through the postseason and had surgery after the Eagles defeated New England in Super Bowl LII, a game in which Jeffery scored the Eagles’ first touchdown. There has been no timetable provided for Jeffery’s return.

Chris Maragos, safety: Maragos suffered season-ending knee injury in last season’s Week 6 victory at Carolina, tearing the posterior cruciate ligament in his knee. It’s a complicated injury and recovery that could keep Maragos sidelined for at least a couple of more weeks.

Tim Jernigan, defensive tackle: An offseason back injury required surgery, keeping Jernigan off the field throughout the spring practices. The Eagles have not addressed the defensive tackle position in free agency other than to add Haloti Ngata in early March.

Bryce Treggs, wide receiver: This is a surprise name on the list, as Treggs has an undisclosed injury that has him starting camp on NFI. Treggs can ill afford to miss time with the Eagles experienced and talented at the wide receiver positions.

Quarterback Carson Wentz is practicing and taking part in limited activities. Middle linebacker Jordan Hicks, returning from a torn Achilles tendon, has been given the green light to practice. Left tackle Jason Peters missed most of last season with a knee injury, but now he’s on the field. Same with running back Darren Sproles, who suffered a torn ACL and a broken wrist in the Week 3 victory over the New York Giants at Lincoln Financial Field.