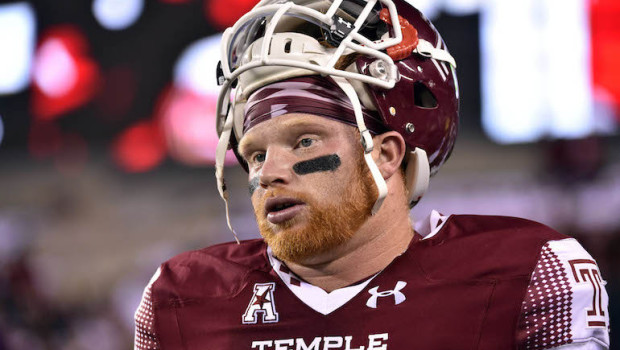 HERE ARE THE 3 TEMPLE OWLS SELECTED IN NFL DRAFT!

Tavon Young, CB — Ravens, 6th pick (104th overall) of 4th round
Young becomes the first Owls player to be drafted since 2012, when Bernard Pierce, Evan Rodriguez and Tahir Whitehead were selected. Young, a 5-foot-10, 180-pounder, led Temple in 2014 with a career-best four interceptions as a junior. The four INTs went for a total of 153 return yards and a touchdown. His other career touchdown came on a 63-yard fumble recovery that season. As a senior, he played a career-high 13 games, recording 40 tackles and seven passes defended. He played four seasons for Temple.

Matt Ioannidis, DT — Redskins, 13th pick (152nd overall) of 5th round
Ioannidis becomes the fifth Temple defensive linemen to be drafted over the last 15 years. The others, starting with the most recent, are Muhammad Wilkerson (2011), Terrence Knighton (2009), Dan Klecko (2003) and Raheem Brock (2002). Ioannidis, a 6-foot-4, 292-pounder, was named to the First Team All-AAC as a senior, racking up 42 tackles, 11½ for loss and 3½ sacks. He was one of five Owls to start all 14 games last season. He played four seasons for Temple.

Tyler Matakevich (above), LB – Steelers, 25th pick (246th overall) of 7th round
It took longer than expected, but one of the most prolific college tacklers of the last four seasons, last year’s Bronco Nagurski Award winner for the nation’s best defensive player and a consensus first-team All-American came off the board late in seventh round. Matakevich, the Owls’ star linebacker and team leader, finished his decorated Temple career with a school record 493 tackles and became the seventh player in college football history to finish each of his four seasons with 100 or more stops. Last season, he was the only player in the nation to finish each game as his team’s leader in tackles. Why did a player with so many accolades fall so far? There are concerns about his athleticism and how he’ll be able to keep up in coverage with NFL players.