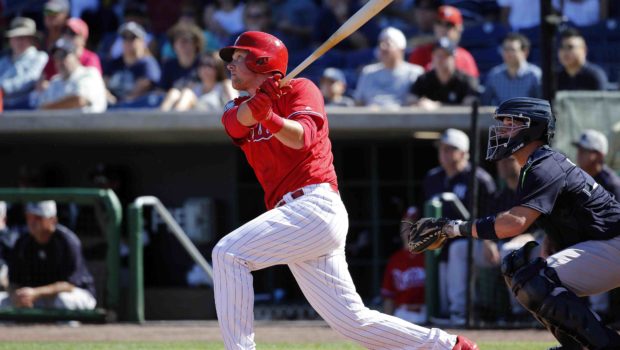 The Phillies are calling up Rhys Hoskins, their No. 6 prospect, from Triple-A Lehigh Valley to make his major league debut, according to MLB.com’s Todd Zolecki.

Ranked as MLB.com’s No. 71 overall prospect, the 24-year-old slugger leads the International League in a host of offensive categories, including home runs (29), extra-base hits (57), total bases (233), RBIs (91), slugging percentage (.581), OPS (.966) and wRC+ (166), through 115 games with the IronPigs. These eye-popping numbers come on the heels of a 38-homer season in 2016 at Double-A Reading. He’d been especially hot of late, going 6-for-15 with two long balls, a double and seven RBIs over his last three contests, including a five-RBI showing last night.

“He’s had a special year, for sure,” Lehigh Valley hitting coach Sal Rende told MiLB.com on Wednesday. “He just stays with what he’s trying to do. He doesn’t change and he doesn’t come off what he’s trying to do at the plate, even if it doesn’t work for a night or two nights. He knows it’s going to work and he stays with his plan. We really haven’t had to do a lot of fine-tuning at all. He’s been a pretty polished player from the very first game here.”