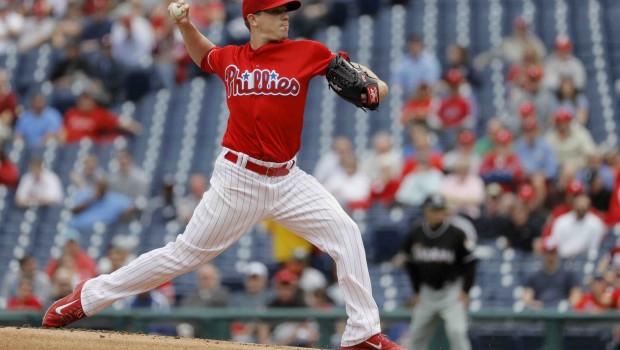 HELLICKSON SHARP IN PHILLIES’ 3-2 LOSS TO THE YANKEES

The Yankees pushed two runs across in the ninth inning to walk off in a 3-2 Grapefruit League win over the Phillies yesterday.

Abiatal Avelino led off the bottom of the ninth with a single off Michael Mariot, and Wilkin Castillo doubled home Avelino before Trey Amburgey laced the game-winning single to center field. The spring win total marks the Yanks’ most since 2009 (24-10-1).

Phillies right-hander Jeremy Hellickson (above) turned in his sharpest outing of the spring. He limited New York to Brett Gardner’s third-inning RBI single over 6 1/3 innings, permitting five hits in his sixth start. The right-hander walked one and struck out three.

“I’ll take that every time,” Hellickson said of his strong start. “Felt good, got some early outs and some great plays out there to help me out a little bit.”

Freddy Galvis supported Hellickson with a two-run single as the Phillies sent eight men to the plate in the second inning against CC Sabathia.

The veteran left-hander scattered nine hits over 5 1/3 innings, walking one and striking out one in a 75-pitch effort (51 for strikes). Sabathia was helped by an Aaron Judge outfield assist that cut down Cesar Hernandez at home plate in the fourth inning.

Michael Saunders was hit in the right hand by a Sabathia pitch in the top of the fifth inning and was removed for precautionary reasons with a bruised hand.