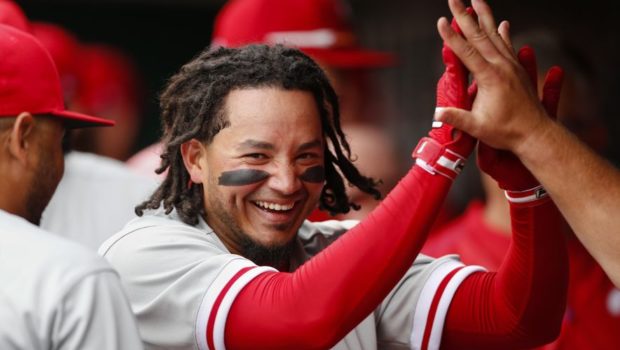 Jeremy Hellickson drove in the decisive run in the sixth inning with his first career triple and the Phillies held on for a 4-3 victory over the Cincinnati Reds in yesterday’s season opener.

“I’m never doing that again,” said Hellickson (1-0), who was still feeling it when he came out of the game after facing one batter in the bottom of the sixth. “I’m stopping at second no matter what.”

Cesar Hernandez opened the Phillies’ season with a homer, connecting on Scott Feldman’s eighth pitch. Freddy Galvis (above) – who had a career-high 20 homers last season – added a solo shot in the second.

Hellickson allowed a run and six hits, his outing cut short after his run around the bases. Right fielder Scott Schebler failed to make a diving catch of his two-out liner, letting the ball get by him as Hellickson chugged across an infield turned muddy by several innings of rain.

Hellickson was the first pitcher to triple in an opener since the Giants’ Jack Sanford in 1963, according to ESPN.

“I was catching my breath for about 30 minutes when I came back in here,” he said.

The Phillies also opened last season in Cincinnati behind Hellickson, who made a solid start before the bullpen allowed five runs in the eighth for Cincinnati’s 6-2 win. The bullpen barely held on this time.

Jeanmar Gomez gave up Scooter Gennett’s two-out, two-run homer in the ninth before retiring Billy Hamilton on a routine fly to get the save. Gomez struggled at the end of last season as well, jeopardizing his job.

“I’m concerned about it,” manager Pete Mackanin said. “For me, he’s earned the right to be the closer for now, but he’s got to get the ball down.”

Feldman (0-1) lasted 4 2/3 innings in his third opening day start and his first for Cincinnati. The right-hander signed with the Reds three months ago to fill a spot in the middle of the rotation, but wound up starting the opener after Anthony DeSclafani and Homer Bailey had elbow problems.

“Any time you don’t make it through five innings, it’s tough to pull any positives out of it,” Feldman said.