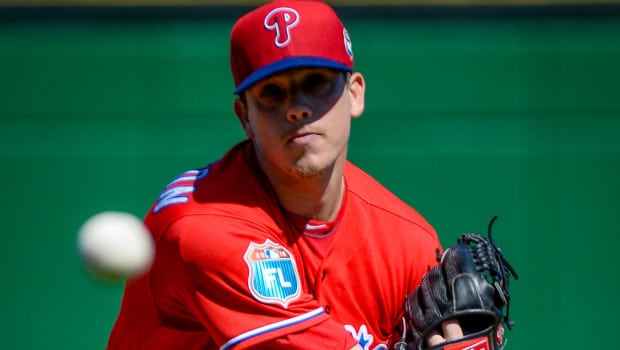 HELLICKSON GETS THE BALL IN TODAY’S PHILLIES-FISH FINALE

The Phillies are handing the ball to Jeremy Hellickson today in the series finale against the Marlins.

Earlier this month, Hellickson (3-2, 4.12) gave up three runs and eight hits over 5 1/3 innings in a win over the Marlins and followed it with seven innings of two-run ball against Cincinnati on Friday. Both runs were unearned for the right-hander, who surrendered four hits with a season-best nine strikeouts in the 3-2 victory.

“My fastball command was a lot better than it’s been,” said Hellickson, who kept the ball in the yard after allowing five home runs over his previous two starts. “That was probably the best changeup I’ve had this year, too.”

He is 0-1 with a 4.18 ERA in five starts against Miami. Ichiro Suzuki is the only Marlins batter who’s seen a good deal of Hellickson from their time in the AL and is 4 for 12 in the matchup. Giancarlo Stanton has struck out four times in five at-bats.

Hellickson will try to give the Phillies another quality outing after six pitchers combined to strike out 17 Marlins in Tuesday’s 3-1 victory. Starter Vince Velasquez got 10 of those strikeouts in five innings.