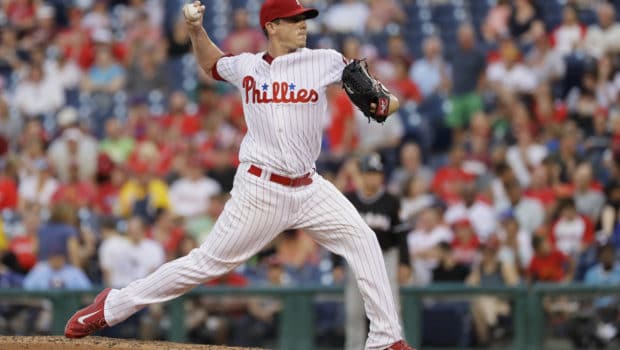 Freddie Freeman hit a tie-breaking RBI double in the ninth, Matt Kemp had four RBIs and the Braves beat the Phillies 8-4 on Friday night.

Ender Inciarte and Adonis Garcia started the ninth with consecutive singles off closer Jeanmar Gomez (3-3). Freeman then lined a double to left to put the Braves up 5-4. Kemp followed with an RBI single past a drawn-in infield. Kemp’s three-run homer in the fifth tied it at 4.

Nick Markakis added an RBI double in the ninth and Tyler Flowers had a sacrifice fly.

“They’re hitting, man,” Braves interim manager Brian Snitker said. “Matt, he hit the homer, but that add-on run was just a good piece of hitting. He’s just an RBI guy. Some guys have a knack for driving runs in. He and Freddie drive runs in. They love those situations.”

“The offense has been showing up the last week or so. Actually, since Matty got here,” Freeman said.

The Braves have scored the second-most runs in the majors (157) since Kemp’s first game on Aug. 2.

“We’ve got some dangerous hitters in this lineup, guys that have been there and done that,” Kemp said. “I really feel the first two guys are setting the table for us offensively. Then me, Freddie and (Nick) Markakis and the rest of us, we’re just feeding off of that.”

A.J. Ellis hit a three-run homer for the Phillies, who blew a 4-0 lead.

The Braves started their rally in the fifth when Gordon Beckham led off with a double and scored on Inciarte’s infield single.

With two on and two outs, Kemp drove a 1-2 hanging curve to the seats in left-center. A frustrated Hellickson crouched behind the mound and scratched his head while Kemp circled the bases.

“I’d like to have that one back,” Hellickson said. “Just a curveball that stayed in the zone too long. I get ahead 0-2 on Kemp and I couldn’t put him away. I can’t make a mistake up in the zone like that with a 4-1 lead.”

Ryan Howard slapped an RBI double the opposite way to left to give the Phillies a 1-0 lead in the first.

Darin Ruf lined a single, Freddy Galvis ripped a double and Ellis drove one out to right to make it 4-0 in the second. Ellis already has five RBI in 11 at-bats for the Phillies after driving in only 13 runs in 139 at-bats with the Dodgers.