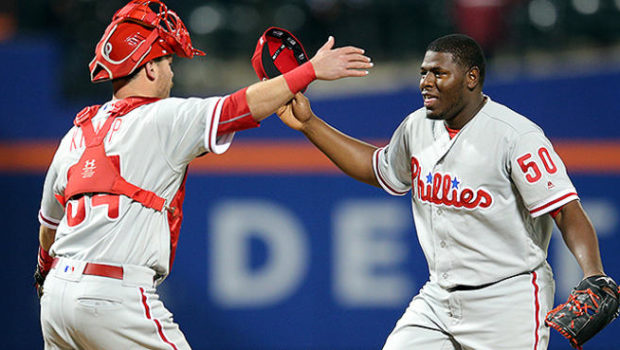 IN HECTOR NERIS, PHILLIES FIND A CLOSER FOR A NIGHT!

The Phillies may have found their closer!

Hector Neris did the job in a 6-4 victory over the Mets after Phillies manager Pete Mackanin demoted Jeanmar Gomez after just three appearances and Joaquin Benoit blew a save Sunday in Washington.

So is Neris the closer?

“No,” Mackanin told MLB.com. “As I said originally, I’m not naming anybody the closer. I was going to use Benoit for the time being. It just occurred to me: It’s nice to have two guys who can close. It was a good opportunity for me to use Neris. He came through very well.

“I don’t want to name it anything,” Mackanin said. “You hear it a lot these days, about how pitchers are being used differently with different teams. I just look at it like this: It’s nice to have two guys I trust in the eighth and the ninth. I trust both of those guys. I just seized the opportunity to try it tonight.

“I’ll probably use Neris again. But it’s nice to have somebody when one guy’s not available, the other guy is.”

It was Neris’ third career save. He got Curtis Granderson to line out to Phillies center fielder Odubel Herrera to end the game. Neris began walking to the outfield to celebrate with his teammates when he heard catcher Andrew Knapp yell, “Hey, man, what about me?”

It is customary for pitcher and catcher to greet each other following the game’s final out.

“Before Torito caught the ball,” Neris said about Herrera, “I had to be sure first. And then, ah, he got it.”