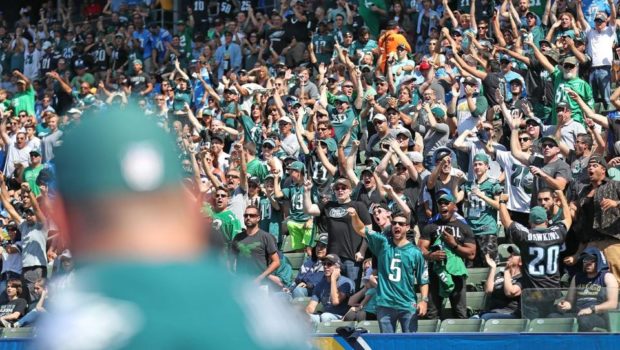 A PRAYER FOR EAGLES FANS: HOPEFUL THROUGH THE APOCALYPSE!

If you’re friends with an Eagles fan, be kind to them this week. Even if they’ve been bristly or hard to deal with in the past—show some good old-fashioned empathy for your Philly pals. Get them a comfy blanket, and a cup of coffee. Buy them a doughnut or two, to anxiety-eat.

Actually, make it two boxes of doughnuts. It’s probably going to be that kind of week.

Sunday was torturous for Eagles Nation. Philadelphia won again, doing it on the road versus the newly-formidable Los Angeles Rams, 43-35. The team is now 11-2, tops in the NFC, and has clinched an otherwise-forgettable NFC East division over Dallas, Washington and New York.

Carson Wentz—Philadelphia’s second year quarterback and a lead candidate for NFL MVP—tore the anterior cruciate ligament (ACL) in his left knee. Wentz left Sunday’s game in the second half and was replaced by backup Nick Foles.

Wentz will miss the remainder of the season.

Philadelphia would have thrown a parade if it had played out like that. But it didn’t play out like that. Eagles coach Doug Pederson confirmed the ACL injury Monday.

Wentz is done for the season.

This (maybe) was going to be Philadelphia’s year! Even if traditionally sky-is-falling Eagles fans told themselves not to believe—to fear something exactly like this injury was bound to happen—the dreamy notion of Philadelphia as possibly a Team of Destiny had to cross their minds, especially after the Eagles flew out of the gates 10-1.

They were a team with a brilliant young quarterback and without a glaring weakness. Even if that loss in Seattle a couple of Sundays ago exposed a few faults, it was generally agreed the Eagles would be a handful in the playoffs.

This moves us over to grim acceptance. Which is the hardest stage, because it forces the fan to consider A Life Without. For the Eagles, A Life Without means Foles, who isn’t a disastrous backup option—he’s just 28, a former starter himself who once had a shiny moment as the Philadelphia Quarterback of the Future. Football is a Next Man Up business, and Foles will be motivated by the chance to seize the controls of a stellar operation.

Jeff Hostetler, anyone? The Hoss famously led the Giants to a Super Bowl win after Phil Simms went down in the 1990 season.

But Foles is not Wentz, who was both the spiritual and actual center of the universe for this Eagles team. The 24-year-old preternaturally grasped and embraced his leadership role in a hard-to-please football town. That was not a small development, especially for a newish pro.

It’s been that kind of year in the NFL. Quarterback injuries had already reshaped seasons in Green Bay, Houston, Arizona, Indianapolis and Miami. There have been season-ending blows to other stars (J.J. Watt, Odell Beckham Jr.) and last week’s alarming spinal injury to Pittsburgh Steelers linebacker Ryan Shazier, who is still in the hospital, prognosis uncertain.

On Sunday, the Houston backup quarterback Tom Savage appeared to suffer a concussion and some kind of seizure—only to be allowed back into the game.

This is football. Don’t buy all that happy talk about precautionary measures and building a safer game—there’s only so much that can be done for a competition in which high-velocity bodily collision is an essential constant. Everyone on the field is at risk. Very few get through unscathed.

For Eagles fans, an injury to Wentz is a painful way to be reminded of this fact. There’s a silver lining somewhere in here, that numerous players have recovered from ACL injuries, and that Wentz’s leadership intangibles will probably be sharpened by the perspective of lost time. But that’s not great consolation amid a Philadelphia season that looked outrageously promising—until, suddenly, it doesn’t.

In the meantime, doughnuts! Get them. Your Eagles friends need them. Now: