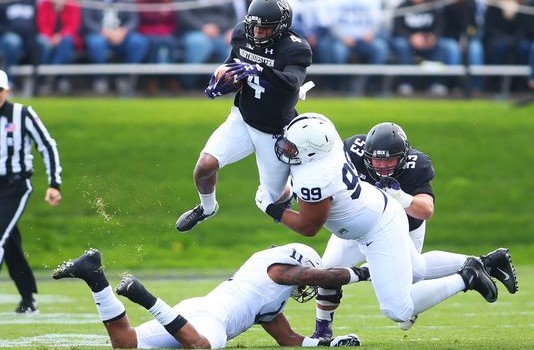 HEARTBREAK BY THE LAKE: PENN STATE LOSES TO NORTHWESTERN 23-21 WITH 0:09 LEFT!

​Solomon Vault (above) added a 96-yard kickoff return for a touchdown with 2:04 left in the first half for Northwestern, which is No. 21 in the College Football Playoff rankings and won its second straight after consecutive losses. For Vault, it was his second kickoff return for a score this season and the third of his career, both school records.

Oliver replaced Clayton Thorson after Thorson was hit with 3:09 left in the first quarter by Penn State’s Carl Nassib. Thorson completed a 13-yard pass to Christian Jones but suffered a lower-body injury on the play and didn’t return.

Nassib’s sack of Oliver with 14:50 left in the game gave him 15½ this season to set a single-season Nittany Lions record.

Northwestern (7-2, 3-2) had to win with Oliver, who had only appeared in three games before Saturday. He passed for 111 yards and threw an interception.

Saquon Barkley ran for 120 yards and had two scores, and the second with 12:22 left gave the Nittany Lions a 21-20 lead. They had a chance to take more time off the clock but Barkley was stopped short on a third and one at his own 15 with 2:25 to go, giving Northwestern the ball back.

Christian Hackenberg and the Nittany Lions offense struggled, which led to the end of their two-game winning streak. Hackenberg was under pressure for much of the day and went 21 of 40 for 205 yards with an interception.

Penn State (7-3, 4-2) pulled to within 20-14 with 5:04 left in the third when receiver Geno Lewis hit DaeSean Hamilton for a 32-yard score. The drive was aided by a pair of 15-yard penalties, including a roughing the kicker call on a punt against Warren Long that returned the ball to Penn State.

Saturday began a tough stretch for Penn State. After playing Northwestern, the Nittany Lions have a bye and then wrap their season with a game at home against Michigan and then visit Michigan State.

And on Saturday, things didn’t start well for Penn State.

Following a scoreless first quarter when the Nittany Lions gained only 22 yards, they quickly fell behind in the second. Christian Jones’ 14-yard touchdown reception with 12:56 left in the second gave the Wildcats a 7-0 lead and was two plays after Warren Long’s 35-yard run got Northwestern into scoring position.

The Wildcats took a 13-0 lead on Oliver’s one-yard touchdown run with six minutes left in the half, before Mitchell missed the extra point.

Penn State’s offense answered, completing a nine-play, 78-yard drive on Barkley’s seven-yard touchdown run with 2:18 left in the half to pull to 13-7.

But Northwestern answered with Vault’s return to regain momentum and take a 20-7 lead into halftime. At first, Vault mishandled the squib kick but picked it up, broke a tackle and sprinted down the right sideline for the score.