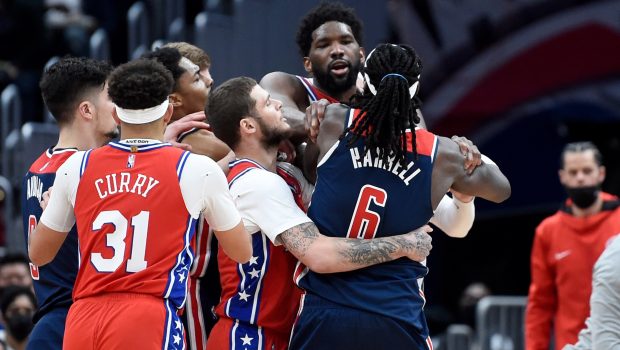 ‘HE FLOPPED, I’M GLAD I GOT HIM,’ SIXERS JOJO SAYS OF HARRELL!

The Sixers Joel Embiid and Washington’s Montrezl Harrell had a scrum in the third quarter, and both were T’d up.

Joel Embiid and Montrezl Harrell were going at it ?

Harrell is now outta there after picking up his second tech. pic.twitter.com/WLqGsa9xig

But evidently only Harrell was T’d off, enough to get tossed after a second tech..

“He flopped. I don’t think he made a play on the ball, and we got tangled. I wouldn’t say I baited him into that. I’d like to think I’m a troll.”

The Sixers’ All-Star big man was not apologetic, doubling down on his trolling with a rather honest assessment.

Joel Embiid has had his brushes with opponents in the past because of his wise-crack personality. The flare-up with Montrezl Harrell obviously didn’t affect him though as he delivered another dominant showing for the Sixers, who improved to 17-16.