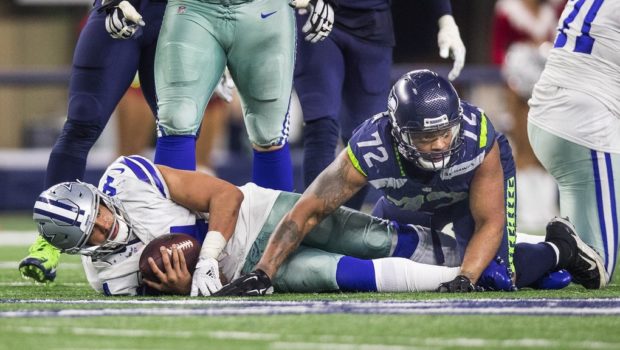 HAWKS FLATTEN DREADED COWBOYS, WHO ARE OUT OF PLAYOFFS!

The dreaded Dallas Cowboys are officially out of the NFL playoffs.

One year after rampaging through the NFL with a 13-3 record, the Cowboys will be home for January, after their last game against the Eagles next Sunday at the Linc.

Justin Coleman put Seattle in front for good with a 30-yard interception return for a touchdown and the Seahawks beat the Cowboys 21-12 on Sunday in Zeke Elliott’s return from a six-game suspension.

Dak Prescott threw two interceptions and the Dallas offense didn’t score a touchdown despite the reunion with his backfield mate, the one he shared a remarkable rookie season with a year ago when Cowboys had an NFC-best 13 wins.

Now Dallas (8-7) is eliminated from the postseason with the end of its three-game winning streak, and the Seahawks (9-6) still have a chance to keep their five-year playoff streak alive.

Coleman gave Seattle a 14-9 lead in the third quarter when he reached down to catch Prescott’s badly overthrown pass to Elliott and ran untouched 30 yards for a touchdown.

It was the fourth pick-six of the season for Prescott, who threw just four interceptions last season when he was the NFL Offensive Rookie of the Year. He has 13 interceptions for the season.

The Cowboys, who lost their first three without Elliott before the winning streak, didn’t take it easy on last year’s NFL rushing leader after his six-week layoff, giving him 15 carries for 73 yards in the first half.

The longest carry was a 9-yarder as he averaged 4.7 per carry. Elliott finished with 97 yards on 24 carries.

0 thoughts on “HAWKS FLATTEN DREADED COWBOYS, WHO ARE OUT OF PLAYOFFS!”