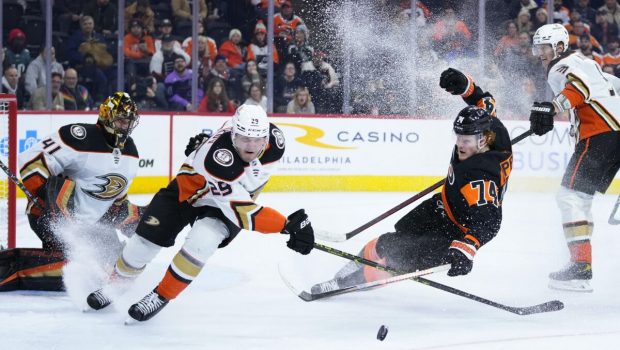 HATTY FOR HAYES AND FLYERS TAKE 8TH IN LAST 10!

Kevin Hayes had his first career hat trick, and the Flyers rebounded from their worst loss of the season with a 5-2 win over the Anaheim Ducks.

The Flyers lost 6-0 at Boston in an afternoon game a day earlier.

They still have only 19 wins but they have won four of five. They are 8-2 since an overtime win Dec. 29 at San Jose and play hard under coach John Tortorella.

“Boston’s a really good team. But they kind of embarrassed us a little bit,” Hayes said.

“I thought our team responded well. It just shows the resilience that we have at this point of the season. You don’t want to keep losing games.”

Yet, the more the Flyers win, the more they cost themselves a better shot at winning the draft lottery. Philadelphia entered with only 5% odds to win the No. 1 pick, per tracker Tankathon.

“I don’t know what’s going to happen in the next 30-plus (games) but these are the things we’re asking as we grow as a team,” Tortorella said.

“I think when you start thinking you’re a good team and you’re growing, losing two in a row is unacceptable. You need to find a way to win that next one so you don’t get into those streaks.”

Hayes, selected to the NHL All-Star Game, made up for a turnover that led to a missed Anaheim breakaway when he scored his 11th goal of the season off a Ducks giveaway in the first