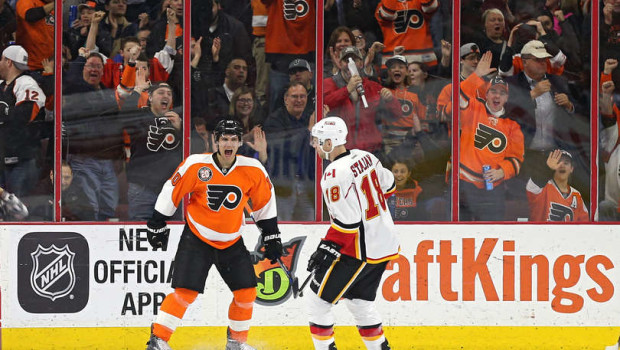 Thanks to Brayden Schenn, who scored his first career hat trick, with all three goals in the first two periods and leading the Flyers past the Calgary Flames 5-3 last night at the Wells.

”They’re not easy,” Schenn said. ”Goals are hard to come by in this league.”

Claude Giroux had four assists and Wayne Simmonds scored twice for the Flyers, who have won three straight and four of five as they remain in the thick of the Eastern Conference playoff race. The Flyers held on after nearly wasting a 4-1 lead and remained three points behind Pittsburgh for the final wild-card spot in the East.

Michael Neuvirth stopped 29 shots and won his 16th game of the season.

”We’ve got a steep hill for us to climb in order to push back into the playoffs,” Flyers rookie coach Dave Hakstol said.

At least they’re not rolling backward.

Schenn keyed the latest win with an outing worthy of his ascension to the top line. He had his apparent first goal ruled no good on video review, then beat Jonas Hiller glove side just minutes later in the first to make it 1-all.

”I thought it was in. It sure looked like it went in,” Schenn said. ”It’s one of those tough ones where there was no white ice under the puck. It was hard to tell. The puck was kind of caught in his jersey or glove, but it’s nice to get rewarded on the same shift with a goal.”

Schenn added two more in the second, his career-high 21st goal enough to make it 4-1 and let fans hurl hats toward the ice in celebration.

”I know I can make plays and produce with those guys,” Schenn said.

Calgary forward Johnny Gaudreau heard his share when his name was announced for the assist on Monahan’s goal. Gaudreau, from nearby Carneys Point, New Jersey, grew up a huge Flyers fan and even played in the youth hockey games at the arena staged during Flyers intermission – when he wasn’t rooting on the orange-and-black from the stands.

”First time I saw him, he was bringing people out of their seats at 15, 16,” Hakstol said. ”Here he is a few years later, continuing to do it at the NHL level.”

The Flyers decided to stand pat in the trade talk, even with forward Jake Voracek sidelined two more weeks with a lower-body injury. While the Flyers did not reveal the nature of the injury, Voracek has a walking boot on his left foot. He will not need surgery.

Under Hakstol, the rebuilding Flyers have remained in the hunt for a playoff spot. Philly did not make a deadline deal for the first time since 2010.

”We’re looking if we can make ourselves better today and not hurt our future, we’re all for it. Nothing came today that made sense,” general manager Ron Hextall said. ”If we wanted to start unloading picks and prospects today, we could have done that and become a better team. Were we going to start letting bodies fly out? No.”