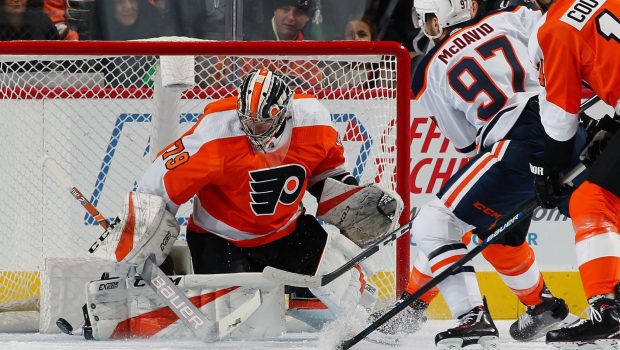 Carter Hart was the sixth of an NHL-record eight goalies to start a game for the Flyers last season, but he brought a level of stability and confidence to the lineup when he arrived Dec. 17. He was 16-13-1 with a 2.83 goals-against average and .917 save percentage in 31 games (30 starts) as a rookie.

Now the 21-year-old enters the season as the No. 1 goalie, and he’ll have to block out the pressure and expectation that comes with playing the position in Philadelphia while continuing to develop in the NHL.

The Flyers traded for Kevin Hayes on June 3 and then signed him to a seven-year contract June 19 to center the second line. He’s coming off his most productive offensive season with 55 points (19 goals, 36 assists) in 71 games for the New York Rangers and Winnipeg Jets. He also should feel comfortable playing for Vigneault, his coach for four seasons with the Rangers. Hayes and James van Riemsdyk have formed some early chemistry in training camp; they’ve known each other for several years through Jimmy Hayes, Kevin’s older brother and van Riemsdyk’s friend and teammate with the USA Hockey National Team Development Program.

Nolan Patrick has not practiced since the start of training camp because of an upper-body injury. The 21-year-old center is considered week to week, but general manager Chuck Fletcher could not say if Patrick would be ready for the season opener against the Chicago Blackhawks at the 2019 NHL Global Series in Prague on Oct. 4. If Patrick misses time, Scott Laughton could move up to the third line from the fourth. Another option is Morgan Frost, the No. 27 pick in the 2017 NHL Draft. The 20-year-old has dealt with a groin injury but looked good during training camp and comfortable playing with and against more experienced players in preseason games.

Joel Farabee, the No. 14 pick in the 2018 NHL Draft, has played most of the preseason at right wing on the top line with left wing Claude Giroux and center Sean Couturier. The 19-year-old was seen early on as a placeholder until restricted free agent Travis Konecny signed, which he did Sept. 17, but has stayed with Giroux and Couturier. Konecny scored 24 goals each of the past two seasons but could be shifted to the third line with left wing Oskar Lindblom, and Patrick when he’s healthy, to spread out the scoring.

Vigneault and assistant Michel Therrien bring a different approach to a power play that was tied for 22nd in the NHL last season (17.1 percent). That has included flipping Giroux from the left half-wall, where he’s played most of the past few seasons, to the right side on the top unit. That could allow Giroux to make better use of van Riemsdyk, a left shot, in front of the net, similar to the way he used right-shooting Wayne Simmonds when they were teammates.

Assistant Mike Yeo oversees a penalty kill that was 26th last season (78.5 percent) and has been in the bottom third of the NHL since 2014-15. Hayes, who killed penalties in New York, could be a big help in this area.

Chris Stewart has played himself into an option for a fourth-line spot. The 31-year-old, in camp on a professional tryout contract (PTO), has taken advantage of the opening created by the absence of Tyler Pitlick, who is recovering from September wrist surgery. Stewart last played in the NHL with the Calgary Flames and Minnesota Wild in 2017-18, and played 23 games in England last season, but has impressed with his physical play and urgency during the preseason.

Defenseman Matt Niskanen, acquired in a trade from the Washington Capitals for defenseman Radko Gudas on June 14, adds depth, stability and Stanley Cup championship experience. During training camp, the right-handed shot has been playing with left-shot Ivan Provorov on the top defense pair. The 32-year-old will also likely play a big role on the penalty kill.