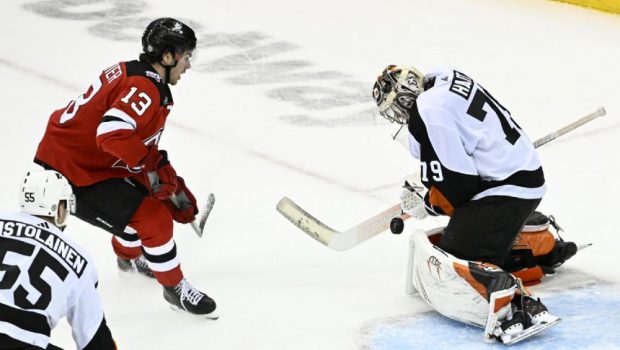 Carter Hart matched his career high with 48 saves as the Flyers beat the Devils 2-1 in a game decided by Travis Konecny’s breakaway goal with 8:14 to play.

“He was dialed in,” said Scott Laughton, who also scored as the Flyers snapped a four-game winless streak (0-2-2) and beat the Devils for the second time in three meetings.

“Big save there in the third,” Laughton added. “Even at the end, slides cross-crease. Saves a back-door chance. You need your goalie to be good, especially against a team like that with so much speed and skill. He was great for us.”

Hart not only stopped all but one shot but at least a dozen were top-quality chances, including an opportunity in close by Jesper Bratt in the waning seconds.

“They (defense) did a good job of letting me see the puck, boxing guys out, not letting them get any second whacks at pucks, loose pucks,” said Hart, who also had 48 saves in a win over Florida earlier this season. “The one at the end there with what, 10 seconds left, was off to my blocker, squirts to the middle and Risto (Rasmus Ristolainen) does a good job of clearing it. That was a huge play at the end.”

Jack Hughes scored for the Devils and Vitek Vanecek had 22 saves as New Jersey fell to 0-3-1 in its last four.

The decisive goal came when a pass by Devils defenseman Damon Severson from the boards in the Flyers’ zone was deflected. Konecny, who had mixed it up with Hughes in the second period, intercepted the puck, skated alone into the Devils zone and beat Vanecek to the stick side for his 12th goal.

Devils coach Lindy Ruff was annoyed after the game, saying the Flyers didn’t have a chance in the third period and he had just told his team not to make any high-risk passes.