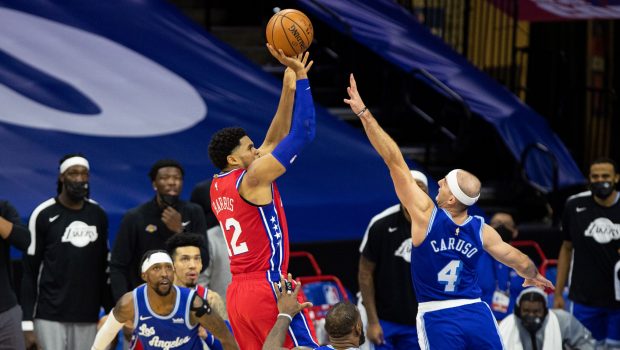 The Sixers are a 5 1/2-point fave at the Wells tonight against the Indy Pacers after their 112-109 in overtime loss at home to the undermanned Cleveland Cavaliers on Saturday.

It’s unclear whether Tobias Harris will be able to return from a right knee contusion. Harris missed the game against the Cavaliers and it was evident that the Sixers were a different team without their standout swingman.

Joel Embiid had 42 points and 13 rebounds while Ben Simmons added 24 points, eight assists and seven rebounds. Without Harris and with Seth Curry missing 12 of his 13 field-goal attempts, the Sixers came up short.

“I thought we just came out flat. Zero energy tonight … which shows you just a lack of discipline,” Sixers coach Doc Rivers said.

It was only the third home loss all season for the Sixers, who ended the night a half-game ahead of the Brooklyn Nets for first place in the Eastern Conference.

The bench, which provided 46 points in a win over the Dallas Mavericks last Thursday, was virtually non-existent against Cleveland. The Cavaliers featured only nine players.

Curry, who had a bout with COVID-19 earlier this season, looked shaky on both ends of the court. Curry missed seven games and returned on Jan. 22.

“I just think shooters shoot,” Rivers said. “They go through these stretches. I don’t think he’s been very consistent since he’s returned really from COVID. We had heard that other players had been in and out like this as well. So the best thing to do is just keep playing him and that’s what we are doing.”

The reeling Pacers will be hoping to avoid a fourth consecutive loss when they visit the Sixers.

On Saturday, the Pacers were defeated 110-107 by the New York Knicks.