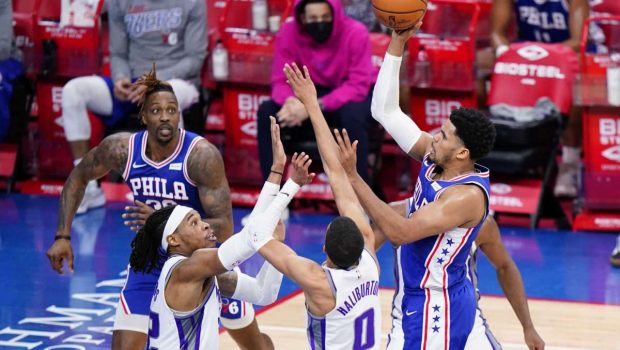 Ben Simmons and Joel Embiid were out of the lineup last night for the Sixers.

So Tobias Harris scored 23 of his 29 points in the first half to lead the Sixers over the Sacramento Kings 129-105.

“He really set the tone tonight with his attitude and then obviously his play,” coach Doc Rivers said. “His total play was phenomenal.”

The Eastern Conference-leading 76ers (29-13) are now a game ahead of the Brooklyn Nets.

“I take that stuff personal when people believe we can’t win without those guys because I know how much talent we have as a group. And I know how well we play together as a team as a whole. We have a culture and a system here that works. When we trust it and do what is asked of us, we’re a hell of a team.”

In addition to regular starters Green and Harris, the Sixers went with Tony Bradley, Matisse Thybulle and Milton to open the game.

“With all those guys out, what we did was execute well,” Rivers said.

Sacramento never got close after that.

The offense kept coming for the Sixers in the second, and they were up 73-52 at halftime.

Philly took its biggest lead on Dwight Howard’s tip-in with 6.1 seconds left in the third period that made it 106-80.

“It’s obviously good to play that type of basketball and get a victory,” Harris said. “Just a testament to guys making shots, us playing in a flow and getting into a rhythm.”

Buddy Hield scored 25 points and De’Aaron Fox added 16 for Sacramento, which dropped to 2-3 on a six-game road trip that concludes Monday at Cleveland. The Kings (17-25) entered 2½ games behind Memphis for the No. 10 seed and a berth in the NBA’s Play-In Tournament.