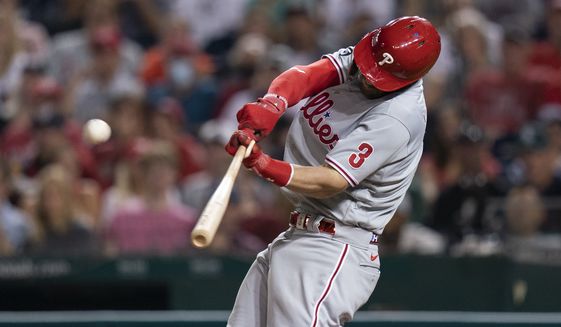 Bryce Harper’s solo, 430-foot home run in the eighth inning was the difference in the Phillies’ 5-4 victory over the Washington Nationals that elevated them to within 1 1/2games of the NL East first-place Mets.

Starter Zack Wheeler (9-6) gave up a two-run homer to Josh Bell in the eighth. Wheeler was pushed a night after the Phillies used most of their bullpen to get through a 7-5 victory. Wheeler allowed eight hits and four earned runs in 7 ⅓ innings.

Jose Alvardo pitched the ninth for his fourth save.

Wheeler controlled the first 5 2/3 innings with crisp fastballs. He struck out eight, did not allow a hit until the fifth and generally looked like the NL strikeout leader.

Washington starter Patrick Corbin (6-10) allowed Segura’s homer on his first pitch, but generally matched Wheeler. It was Segura’s third leadoff homer this season and the 12th of his career.

Corbin ran into trouble in the seventh. Realmuto’s 12th homer of the season snuck over the wall in right-center. Alec Bohm walked and Torreyes hit his fifth homer on the first pitch he saw. Corbin’s velocity dropped from 95 to 92 and the Phillies took a 4-0 lead.

Washington pushed across a run in the seventh after Yadiel Hernandez and Carter Kieboom opened with singles. Gerardo Parra’s pinch-hit single drove in Kieboom to pull the Nationals to 4-2. Andrew Stevenson’s hard lineout ended the inning.