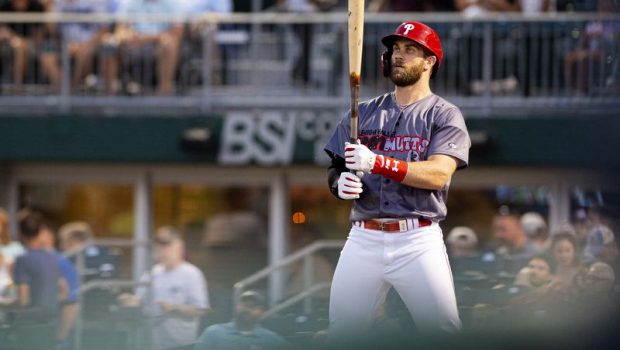 HARPER’S 2 IRONPIG JACKS: WHY WAIT TIL NEXT WEEK TO REJOIN PHILS!

Why wait until next Thursday?

Harper homered to right-center field in his first at-bat, then went opposite field for a three-run shot in the eighth inning for the Phils Triple-A team to begin his rehabilitation assignment from a broken left thumb.

Harper was the designated hitter and hit second in the lineup for the Lehigh Valley IronPigs for the start of a six-game series against Gwinnett. He drilled the fifth pitch he saw from Atlanta Braves prospect Jared Shuster high over the wall at Coca-Cola Park in front of what was announced as a sellout crowd of 10,100 fans.

“I think any time you go out there and you’re able to put the bat on the ball and have good at-bats, see pitches, compete at a high level, it’s always good,” Harper said.

He walked against Shuster in his second at-bat to the boos of the crowd that wanted Harper to take another hefty hack. Harper was then caught stealing. He grounded out in his third plate appearance, and walked again and scored in the seventh to lead Lehigh Valley past Gwinnett 10-5.

Harper, who won his second NL MVP award last year, hasn’t played for the Phillies since he broke his left thumb on June 25. He is expected to play in Lehigh Valley through Saturday and possibly return to the Philadelphia lineup on Monday when the playoff-contending Phillies begin a series at Arizona.

But with two homers in his first rehab game, why wait until Monday to add him to a team that very much needs him now?

“Tonight was great, right? But at the same time, I need the at-bats, I need to be able to see pitches, different guys, different angles, understanding how my body’s going to react, what my thumb’s going to be like,” Harper said.

The 29-year-old Harper, who signed a $330 million, 13-year deal with the Phillies in 2019, is hitting .318 with 15 home runs, 48 RBIs and a .985 OPS. Harper had already surrendered his spot in right field earlier this season because of because of a small tear in the ulnar collateral ligament of his throwing elbow. He last played the field at Miami on April 16.

Asked if he could play right field in September, Harper simply said, “no.”