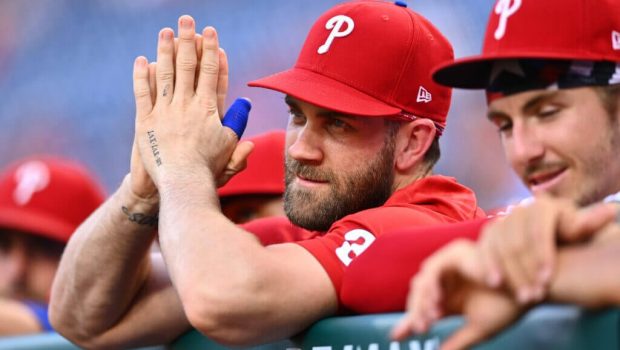 HARPER TO BE ACTIVATED FRIDAY FOR PHILS-PIRATES SERIES AT CBP!

The Phillies will activate Bryce Harper Friday for their series with the Pittsburgh Pirates at Citizens Bank Park.

Harper has been out since June 25, after a 97 mph Blake Snell fastball fractured his thumb in San Diego.

After collecting 13 total bases in two games for the Triple-A Lehigh Valley IronPigs, according to manager Rob Thomson, the Phillies decided Harper was ready.

He hit two home runs on Tuesday in his first rehab game and went 3-for-5 with two doubles the next day.

The Phillies let Harper recover at his own pace, but the original plan was for him to play for the IronPigs through Saturday, take a day off, then perhaps be ready to join the team in Arizona on Monday. This seemed like a best-case scenario, since for weeks it sounded like he’d rejoin the Phillies at some point in September. So for the Phillies to get one of the best hitters in the game back in the lineup on Aug. 26 is extremely good news.

Harper is batting .318 with a .985 OPS, 15 home runs, nine stolen bases, 48 RBIs and a 166 wRC+. He’s played with a partially torn UCL throughout most of the season that forced him to be a designated hitter to prevent him from having to throw, and that will continue throughout the rest of the season.

After a slow start to the season that resulted in Joe Girardi getting fired on June 3, the Phillies have been one of the league’s best teams with a 47-26 record during Thomson’s time as interim manager. At 69-55, the Phillies are second in the wild-card standings, two games ahead of the San Diego Padres and 3 1/2 games up on the Milwaukee Brewers.