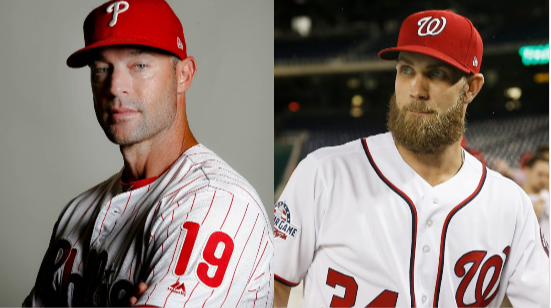 The Phillies have been in the mix for Harper since the start of Major League Baseball free agency, and it sure seemed like the two sides were inching toward a deal.

After Harper met with Phillies owner John Middleton last Friday, it was reported the outfielder could come to an agreement on a 10-year deal with the Phils as early as Monday.

But the Dodgers reportedly are making a late push to sign Harper.

But aside from Harper’s reported preference to sign with a West Coast club, the Phillies might be behind the eight ball in the Harper sweepstakes thanks to their bench boss.

For what it’s worth, my source who is close to Bryce Harper tells me #Dodgers and #Cubs were 1st choices all along and he prefers not to sign with #Phillies.

While Kapler didn’t get off to the best start in first season as Phillies manager, the ex-outfielder really turned things around to spark hope for the future in Philadelphia. And when it comes to “quirkiness,” Chicago Cubs manager Joe Maddon has it in spades.

But Harper’s impending contract will be the most important business decision he’s made in his life to date, so it’s tough to blame the six-time All-Star for doing his due diligence to the highest degree.