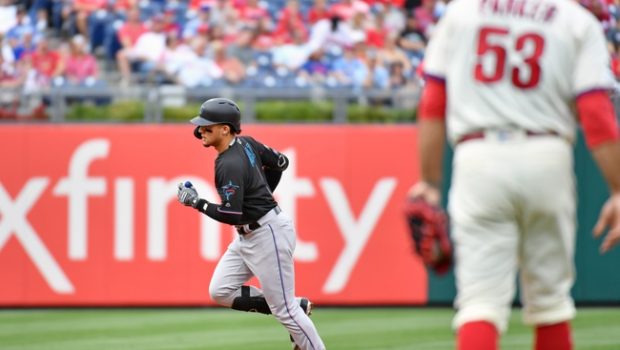 HARPER GETS A STANDING O AS PHILS END 2019 A LOSER!

Bryce Harper got a standing O to close out his first season with the Phillies, who finished at 81-81 after a 4-3 loss to the Miami Marlins.

Harper drew a cheer from the crowd at Citizens Bank Park after a flyout in the ninth inning. Signed to a $330 million, 13-year contract, he wound up batting .260 with 35 homers and 114 RBIs.

”I tried to play hard for them, tried to play to the best of my ability,” Harper said of Philly’s demanding fans. ”The fans and the city deserve that. I love this place. I’m excited to see what’s ahead.”

Brad Miller hit a pair of homers for the Phils, who ended a run of six straight losing campaigns but that might not save Kapler. He is on the hot seat after going 161-163 over two seasons.

”Expectations were high and we didn’t get the job done, but it wasn’t for lack of effort,” manager Gabe Kapler said.

The manager deflected all questions about his future with the Phillies.

The hopes were inspired after signing Harper, Andrew McCutchen and David Robertson and trading for star catcher J.T. Realmuto and shortstop Jean Segura.

Harper and Realmuto delivered, but Robertson pitched in just seven games before an elbow injury and McCutchen’s promising season ended in early June with a knee injury.

”There was some incredible adversity, but they kept getting back up,” Kapler said.

The Phillies had a big hump in attendance this season to 2,727,421 from 2,158,124, their highest since 2013. They started with a three-game home sweep of NL East champion Atlanta in front of packed houses that had the feeling of a return to 2007-11, when Philadelphia captured five straight NL East titles, including the franchise’s second World Series championship in 2008.

Realmuto, whose season was cut short due to knee surgery on Friday, batted .275 with 25 homers and 83 RBIs.

”I know as a team we’re going to try to get better,” Harper said.

Starlin Castro homered and doubled, and Martin Prado and Isan Diaz also went deep for the Marlins (57-105), who finished with a losing record for the 10th straight season. Miami came within three losses of tying the 1998 club for most defeats while reaching 100 losses for the third time in the franchise’s 27-year history.

”It’s been two straight years of taking our lumps but gaining experience,” said manager Don Mattingly, who will return for a fifth season. ”It’s time for us to start turning the corner and being more competitive.”

Mattingly sat back and enjoyed this win – he let shortstop Miguel Rojas run the team for a day. Rojas made the lineup and the moves in the victory.

Sandy Alcantara (6-14) allowed one run and eight hits in six innings while setting a club rookie record for starts in a season with his 32. Tyler Kinley got two outs for his first save.

After second-inning homers by Castro, who played in every game this season, and Diaz off Blake Parker (3-3) put Miami in front, Prado made it 4-0 with a solo shot in the third.

Parker was one of seven relievers used by Philadelphia in a bullpen-by-committee game after Kapler decided to shut down ace Aaron Nola, originally was scheduled to start,.

The Phillies to 4-3 in the seventh on the second of Miller’s drives.