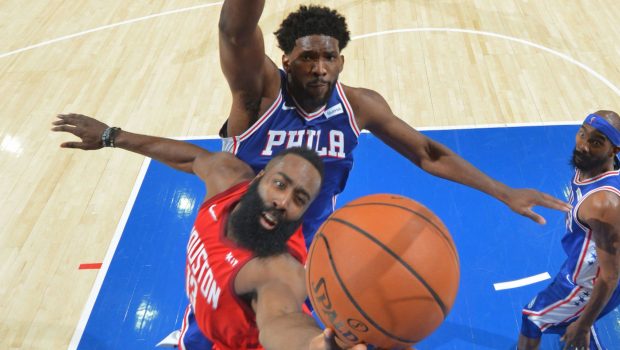 HARDEN TO SIXERS? ‘NO WAY, NO HOW, HE FLAMES OUT IN PLAYOFFS’!

There’s been a lot of buzz in Philly that new Sixers boss Daryl Morey would love to trade for James Harden, the great offensive player he had with the Houston Rockets.

Even it means trading Joel Embiid or Ben Simmons to get The Beard.

Here’s how iHeart Radio dealt with it yesterday:

Host Chris Broussard: “If you could, would you add James Harden and give up one of your young stars to do it?”

“NO WAY, NO HOW. I feel bad for basketball fans in Philadelphia became somehow, someway in this quest to win a championship they’ve turned into the Philadelphia LOSER-Sixers. Everybody they’ve acquired has some checkered past when it comes to the postseason.

Yes, Doc Rivers won a championship, but of late it has been BAD and not good.

Daryl Morey was running that franchise for 13 years, and they only got to the conference finals twice, never to the Finals.

THAT’S what you want to add? That’s the ‘change’ of culture?? Let’s bring in everybody who hasn’t gotten it done, and that’s how we’re going to change the Philadelphia 76ers into winners.

It’s ludicrous and asinine. It makes no sense to make this happen… Harden has already proven to me that his game of getting calls in the regular season doesn’t seem to work come postseason. I don’t know where the LOSER-Sixers are going with this plan.”