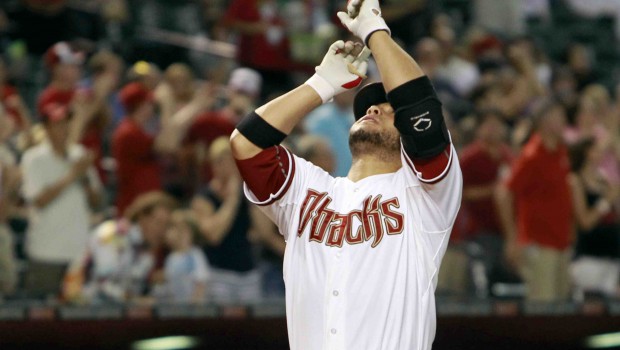 Nothing lasts forever in sports.

Especially the Phillies’ best-in-baseball winning ways since the All Star break.

Welington Castillo tied a career high with four RBI and Yasmany Tomas and A.J. Pollock homered, leading Arizona to a 13-3 win over the Phillies last night.

The Diamondbacks scored three runs in the fifth inning to break a 2-2 tie, highlighted by Castillo’s solo homer with two outs. Castillo later tripled with the bases loaded and has eight home runs and 14 RBI in his last 12 games.

“He got me good straight on my head,” Castillo said of the follow-through by the Phillies’ Domonic Brown in the sixth inning. “For a couple of minutes I was feeling a little headache but it’s not a big deal. I wanted to stay in the game. I want to give 100 percent all the time.”

Castillo was checked by a trainer after being struck, but stayed in the game until being lifted on a double-switch before the eighth inning.

“He’ll tell you he’s not banged up,” manager Chip Hale said. “His hamstring’s a little tight. He’s been hit a little bit. But it’s being a catcher. We’ll see about (Tuesday) and he’ll catch one of these next two.”

Tomas, who had not been in the starting lineup the previous three days, hit a towering home run to left field off Phillies starter Aaron Harang, a solo shot that gave Arizona a 2-1 lead in the fourth. But the Phillies drew even in the fifth on a two-out double by Cesar Hernandez that scored Chase Utley from first base.

The Diamondbacks responded in the bottom of the inning with Pollock’s leadoff triple, and, after a walk, Paul Goldschmidt hit a sacrifice fly.

David Peralta doubled off the wall in center field to drive in Jake Lamb for a 4-2 lead. Then Castillo went deep to center field for his 15th home run of the season and a 5-2 lead.

After the Phillies cut the lead to 5-3 on Maikel Franco’s home run in the sixth, the Diamondbacks put up six runs in their half of the inning. Castillo accounted for four of those, driving in three with the triple and then scoring on a single by Tomas.

“I just tried to go in and enjoy the game,” Tomas said in Spanish. “It’s always great to play. The manager is the one who makes the decisions. I’m just here to execute.”

Pollock’s home run made it 13-3 in the seventh, with Phillies reliever Justin De Fratus tagged for three runs in 1 1/3 innings.

Peralta finished 3 for 5 with two RBI and Pollock had three hits.

“Everybody’s having fun every day and if we keep playing the right way, good things will happen,” Peralta said.

Harang (5-13) left after 5 1/3 innings having allowed eight runs and 12 hits. Harang struck out four and walked one.

“There were some really good pitches that I threw that were getting hit hard. They were seeing the ball well off of me,” Harang said. “They were too comfortable up there. Way too comfortable.”

Phillies rookie Odubel Herrera extended his hitting streak to a career-high 13 games with a third-inning single.