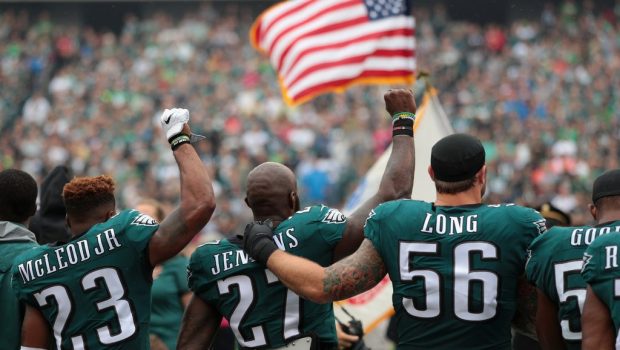 So says E. J. Dionne of the Washington Post:

It is, unfortunately, appropriate that the National Football League’s owners decided to issue their rule attacking free expression the week before Memorial Day.

A holiday dedicated to those who gave their lives for our nation’s freedom has itself been mired in political controversy almost from the beginning. The latest round of posturing and pandering around patriotism should not surprise us.

Samuel Johnson saw patriotism as “the last refuge of a scoundrel.” Let’s qualify that. An honest love of country is a virtue, not a vice. And nothing should sully the honor of the men and women whose sacrifices make it possible for us to speak and worship freely, and to exercise democratic control over our government.

Nonetheless, Johnson was onto something, because patriotism often is manipulated in the name of power, advantage and, in the case of the NFL’s wealthy overseers, money. And the contested history of Memorial Day is a story not only of innocent local pride but also of political and cultural clashes.

It took until 1966 for Congress to grant official recognition to Waterloo, N.Y. — it first decorated the graves of Union soldiers on May 5, 1866 — as the originator of the holiday.

But there are many other claims. The great Civil War historian James McPherson told the story of a Northern abolitionist who traveled to Charleston, S.C., to organize schools for freed slaves. On May 1, 1865, a year before Waterloo, he led a group of black children to a cemetery for Union soldiers “to scatter flowers on their graves.”

In the meantime, Southern women began organizing ceremonies for those who died doing battle for secession, culminating in the practice of Confederate Memorial Days. Gen. John A. Logan, the commander in chief of the Grand Army of the Republic, the politically influential Union veterans group, is widely credited with taking the holiday national. He called on the GAR’s posts to hold decoration riteson May 30, 1868, for those who died to keep the country together. By 1891, every Northern state had established May 30 as a holiday.

It’s no shock that the holiday’s many currents of regional and racial tension rose to the surface during President Barack Obama’s time in office. In 2009, a group of scholars, including McPherson, wrote Obama, urging him to abandon the practice that began with President Woodrow Wilson of sending a wreath to the Confederate Memorial at Arlington National Cemetery.

As was his way, Obama responded with what he hoped would be unifying gestures. He lay the traditional wreath at the Tomb of the Unknown Soldier, had a wreath delivered to the Confederate Memorial and became the first president to send one as well to the African American Civil War Memorial in Washington . It commemorates the service of more than 200,000 people of color who fought for the Union.

Oh, yes, and in 2010, when Obama chose to honor the war dead in Chicago, some of his conservative critics intimated he was the only president not to lay a Memorial Day wreath at Arlington.

That was flatly untrue. Presidents Ronald Reagan, George H.W. Bush and George W. Bush and others had all been elsewhere on Memorial Day at least once during their terms: