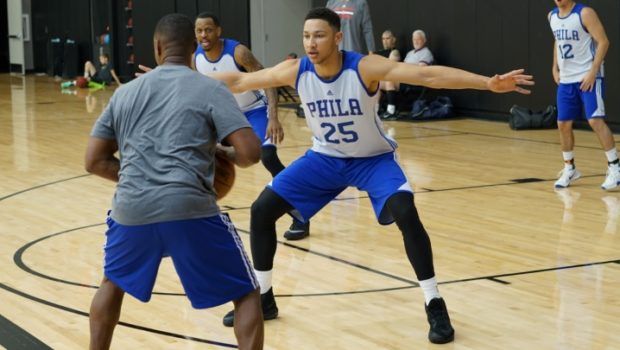 For Sixers rookie Ben Simmons, yesterday was the first day of the rest of his NBA life.

He was back on a basketball court, playing for the first time in a meaningful way since his last game at LSU on March 12.

“Amazing” was the word Simmons used to describe his first practice with the Sixers, which a week and a half ago selected him number one overall in the NBA Draft. “A little rusty, a few turnovers, but it’s all part of it.”

The Sixers resumed their two-day summer league minicamp at the Huntsman Basketball Center on the campus of the University of Utah.

Before then, Simmons hadn’t played in a five-on-five setting since March 12th, when he posted 10 points and 12 rebounds in a loss to Texas A&M that eliminated Louisiana State from the Southeastern Conference Tournament. The Tigers didn’t appear in the post-season, so the defeat ended up being Simmons’ final collegiate game.

More than anything else, as he put on the Sixers’ number “25” practice jersey for the first time, Simmons seemed to prioritize getting acquainted with new surroundings.

“It’s good meeting everybody and adjusting,” he said. “That was the biggest thing for me, feeling a part of a family again.”

Simmons arrived in Salt Lake City Saturday, and later that evening, put pen to paper on the first contract of his NBA career.

Timothe Luwawu-Cabarrot, one of the Sixers’ other two first-round choices from the draft, also signed his rookie deal Saturday, which helped clear the way for both to join their 13 other summer league teammates for Sunday’s two-a-day.

“It’s exciting to add your new blood, having your draft picks around,” said Billy Lange, one of Brett Brown’s assistants who will coach the club’s entry in the Utah Jazz Summer League. “They fit in great with the group because they’re both unselfish players.”

About Simmons specifically, Lange added, “Here’s what I can say today – there was nothing about him that said he didn’t want to be a part of something bigger than himself.”

While Simmons might not have sounded all that thrilled with his own performance in the Sixers’ two-hour workout Sunday morning, Lange was impressed on several fronts.

“Great size, just how willing he is to get rid of the ball,” Lange said. “He just finds awesome joy and enthusiasm of sharing the basketball, and then that becomes contagious.”

During the full-court scrimmage portion of Sunday’s practice that was open to reporters, Simmons not only demonstrated his comfort handling and distributing the rock, but driving to the basket and finishing as well. At LSU, the 6-10, 240-pound power forward routinely put a diverse skill set on display, averaging 19.2 points, 11.8 rebounds, 4.8 assists, and 2.0 steals per game.

Now, as Simmons prepares for his first form of professional competition, many outside observers, particularly fans and media, are eager to see how the 19-year old Australian’s many talents translate to the NBA.

“I know a lot of people will be coming for me because I got that number one spot,” said Simmons, who was also rated the top player in the country after graduating from Montverde Academy in 2015. “It’s always been like that for me since high school. It’s fun. I love getting the challenge.”

Over the course of the Sixers’ summer league slate the next two weeks, Simmons could find himself confronting other highly-regarded prospects from the 2016 draft class. This coming Saturday in Las Vegas, for instance, the Sixers are scheduled to play the Los Angeles Lakers, which used this year’s second pick on Brandon Ingram. Simmons, however, is more focused on big-picture themes.

“Going into the NBA, I’m not looking at rookies or anything like that,” he said Sunday. “I’m looking at the top guys like ‘Bron [LeBron James], K.D. [Kevin Durant]. Those are the guys that I have to be facing, so I need to get ready for them.

“I respect everybody, but I don’t fear anyone. I’m willing to put in the work to win, and that’s the goal coming here.”

As much excitement as Simmons’ presence brought to the Huntsman Basketball Center gym on Sunday, player and team alike were lockstep in speaking about the significance of the day. It was so very much the earliest of first steps in a partnership the two sides are just starting to forge together.

“I love playing the game,” said Simmons, “especially being a part of the Sixers. It’s an honor. I’m looking forward to it.”