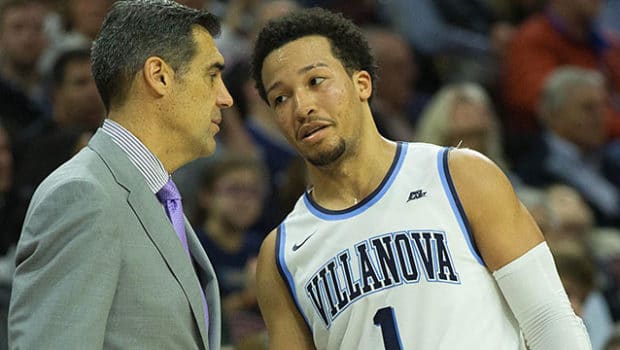 “I don’t want to beat Hofstra. I root for Hofstra,” said Villanova coach Jay Wright, who coached there from 1994-2001. “I watch Hofstra games. I follow the Hofstra scores.”

Wright’s No. 1-ranked Wildcats had their own attitude yesterday, as they crushed Hofstra, 95-71.

It was a game for only about 10 minutes.

Omari Spellman had nine points and Donte DiVincenzo five to power Villanova through a 27-7 first-half run for a 44-23 lead with 2:46 left in the half. Villanova (12-0) never let Hofstra (7-5) get closer than 18 points in the second half.

“You can’t make mistakes against this team. If you do, they make you pay. It’s why they’re No. 1 in the country,” Pride coach Joe Mihalich said. “I don’t know if they have a weakness. If somebody’s got one, I’d like to have heard it.”

Mikal Bridges had 20 points, Spellman 19, Phil Booth 17 and DiVincenzo 16 for Villanova, which shot 48 percent and was 16-for-34 on three-pointers. Spellman shot 7-for-9 overall.

“We’ve seen all these upsets and this is the kind of team that can do it, with great guards and other guys who know their roles. That’s what we saw with Wofford [against North Carolina],” he said. “Those guards can control the tempo and can get hot and get you.

“That team, when they get to the league [CAA], they’re going to have a chance to win it.”

The Wildcats’ home arena is being renovated and they’re playing many games at the 76ers’ Wells Fargo Center, but they got a chance to play a home game at the Nassau Coliseum. Wright said it would be the perfect setting to play Hofstra, which was the visitor despite being within walking distance of its home court.

During the week, he found nostalgia messing with him. Said Wright, “There was a lot of emotion. I told the guys a few days ago, ‘Look, I’m messed up.’ . . . Coming back here, there are so many great feelings and emotions.”

Wright spoke with Hofstra alumni before the game, and many of his former Hofstra players attended. Before and after the game, he shared a long embrace with Speedy Claxton, once his star at Hofstra and now a Pride assistant coach.

He still appreciates all Hofstra did for him.

“It was very emotional for me. It was tough,” Wright said. “I appreciate our guys staying focused. I don’t know if I was at the top of my game.”