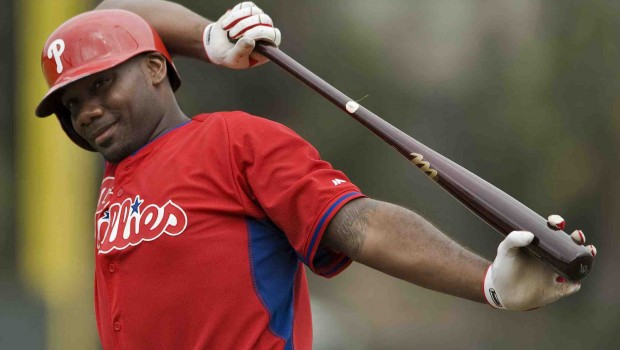 If you closed your eyes yesterday at Clearwater, you could have sworn it was 2008 in the Phillies’ time machine.

Ryan Howard (photo above) bopped a homer and Chase Utley looked younger than springtime slashing a single in the fourth inning.

The work Howard put in during the offseason, which included losing at least 15 pounds, seems to be paying off.

Howard hit his first home run of the exhibition season, and the Phillies beat the Tampa Bay Rays 2-1.

”I’m just going to go out there and do what I can do,” Howard said. ”The approach is try to put a good swing on the ball. If I can get extra-base hits, home runs, whatever I can do to try to help get those guys in, we’ve been doing a great job of being able to go out and execute.”

Utley made his spring training debut after missing 10 games because of a sprained right ankle sustained in January. Batting third as the designated hitter, he struck out in his first at-bat and singled off Chris Archer leading off the fourth.

Utley said he wants to play in the field soon, but he will likely be a DH at least once more before getting to play defense.

”It feels pretty good,” Utley said of his ankle. ”Still making a little progress on it. It’s not perfect yet, but we’re moving in the right direction.”

Howard followed Utley and sent Archer’s next pitch, a changeup, over the right-field wall for a 2-1 lead in the fourth, only the Phillies’ third home run of spring training.

Evan Longoria hit an RBI single in the first off Joely Rodriguez after the Phillies failed to turn what could have been an inning-ending double play. Second baseman Cesar Hernandez’s relay throw landed in the Rays dugout, putting Asdrubal Cabrera on second.

Rodriguez, obtained from Pittsburgh during the offseason, allowed one hit in three innings.

Archer gave up two runs and four hits in 4 1-3 innings with three strikeouts and no walks. Tampa Bay had four hits.

”Even with the home run, I was very pleased,” Archer said. ”Because here’s the thing, there’s no way I’m going to let two pitches define my entire outing. I gave up a base hit to a good hitter (Utley), and I gave up a home run.”