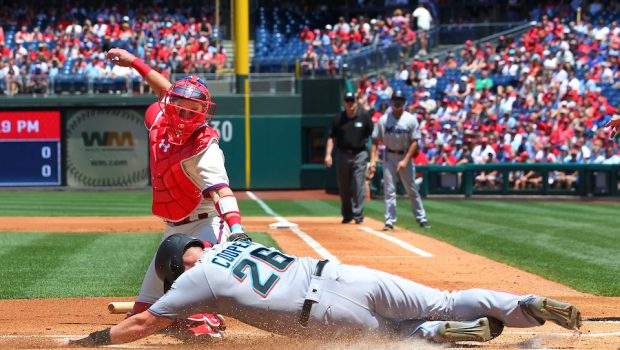 The Phillies season, which not that long ago seemed destined for postseason success for the first time since 2011, is in tatters.

“There’s no sense in sugarcoating it,” Jay Bruce said. “We just haven’t played well. We’re much better than we’ve played. I’m not blind. We’re a good team, a very good team. It’s the biggest reason I was excited to come here: the talent here and the opportunity that was in front of them. I don’t feel like that’s changed one bit.”

Phillies manager Gabe Kapler said the losing will not last. They will be better.

“It’s not like you can chalk it up, but that’s what we bet on,” Kapler said. “That’s what we do when we acquire great players. I’m not going to quit on our players in tough times. We’re going to trust them to be who they are. That’s what this game is all about. It’s ebbs and flows. It’s times of [poor] performance and times of successes and we get together as a group in the tough times. We fight together. That’s what we’re doing right now.”

“We have the right personnel in the room,” Kapler said. “We’re continuing to refine and work on our processes and our practices. Those have to get better always. So the work we do leading up to the game has to improve. I think the last thing I’d say about that is nobody’s going to outhustle us. Nobody’s going to outwork us prior to the game.”

Kapler said the Phillies will do extra work on the field early this week. They will bring out a pitching machine and fire curveballs to hitters. They will have a pitcher throw batting practice. He said they will work to improve their pitch sequencing because opposing hitters are crushing them in hitters’ counts.

“I think pointing fingers at anyone wouldn’t be the right thing,” Bruce said. “This is a long play here and I think we have the team here to get to where everyone who is watching us wants us to get and we just have to stay the course. We have to play better, obviously, but we have to continue to come in here every single day and expect a lot out of ourselves and we do that. We do that every day.”

“We’re just getting beat on both sides of the ball, pitching, hitting, everything,” Harper said. “You do that, you’re going to lose games. Myself included, we’ve got to be better. Got to pitch the ball well, hit the ball well, have good at-bats, get guys in, get guys on base at first and go from there. We don’t want to be here in this situation of losing games. We want to win games, play hard and we can do that.”

Kapler held a team meeting last week in Washington. He changed the lineup. He got ejected for the first time in his managerial career on Saturday. Nothing has sparked a turnaround. Not yet. But he spoke forcefully Sunday afternoon as he answered questions about his team’s poor play.