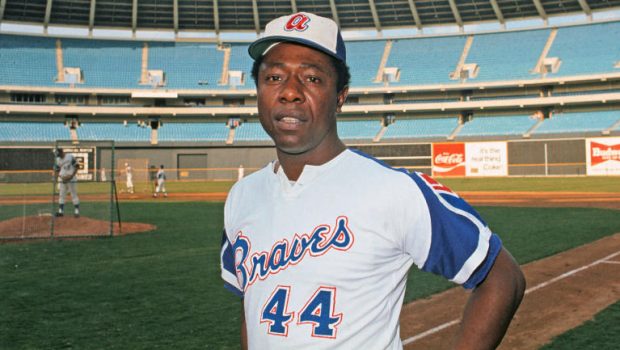 “Throwing a fastball by Henry Aaron,” an opposing pitcher, Curt Simmons of the Phillies, said, “is like trying to sneak the sun past a rooster.”

Hall of Famer and one-time home run king Henry Louis “Hank” Aaron passed away this morning at the age of 86.

He leaves an indelible legacy on and off the field.

Aaron was born in Mobile, Alabama in 1934, the son of Herbert and Estella Aaron. He played in sandlots and started his pro career in the Negro Leagues in 1951. He made his way through the minor leagues until age 20. Aaron then made his Major League Debut and started his 23-year-career with the then-Milwaukee Braves.

He recorded his first of 755 home runs on April 23, 1954 in a game against the St. Louis Cardinals. His first season saw him finish fourth in the rookie of the year voting as he hit .280 with 13 home runs and 69 RBIs. It was just the start of what became one of the most legendary careers in baseball history.

By the time he was in just his fourth season, he hit 44 home runs, drove in 132 RBIs and won the National League MVP award. The 1957 season started a lengthy run that saw Aaron hit at least 25 home runs in every season until 1973. During this time, Aaron and the Braves moved from Milwaukee to Atlanta where Aaron became a living legend on the field.

It was the 1974 season that saw Aaron smash his way into the national consciousness. On April 8, 1974 Hammerin’ Hank, as he was known, crushed a 1-0 pitch from Los Angeles Dodgers pitcher Al Downing over the left field wall at Fulton County Stadium and broke Babe Ruth’s long-time home run record of 714 home runs in a career.

Aaron would play a few more seasons before calling it a career on October 3, 1976. He immediately transitioned into a role with the Braves as director of player development, a position he held until 1989. He then became a senior vice president for the Braves, a title he held for decades.

Aaron remains baseball’s runs batted in leader with 2,297 and total base leader with 6,856. Hammerin’ Hank finished his career with 755 home runs, an all-time record that stood for decades until Barry Bonds passed him and finished with 762 home runs. His #44 jersey was retired by both the Atlanta Braves and Milwaukee Brewers.

On August 1, 1982, Aaron was inducted into the Baseball Hall of Fame in Cooperstown, New York. In 1999, the 25th anniversary of Aaron breaking the home run record, Major League Baseball established the Hank Aaron Award that is given to the best overall hitter in each league. He later received the Presidential Medal of Freedom from President George W. Bush and was inducted as a Georgia Trustee by the Georgia Historical Society in 2010. In 2016, Aaron was presented with the Order of the Rising Sun, one of Japan’s highest honors for his work with the World Children’s Baseball Fair.

But Aaron was more than just a baseball player. He fought through horrendous racism in the deep south throughout his career and even received death threats while he was making his historic pursuit of Ruth’s record. All the while, he remained humble and continued to power through every hurdle that was in front of him.

In his bio from the Hall of Fame, a quote from the greatest boxer ever, Muhammad Ali accompanies it that reads Hank Aaron was, “The only man I idolize more than myself.” A fitting tribute to towering man who left his mark on the baseball field, society, and the fabric of America.