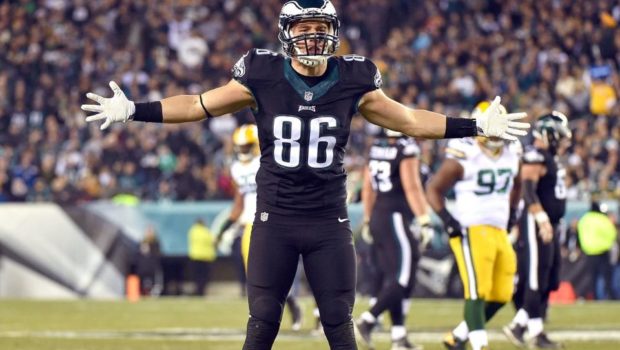 Eagles tight end Zach Ertz missed the Eagles’ blowout of Denver nine days ago with a tender hamstring, but the bye rest seems to have done the trick:

Ertz practiced yesterday for their first post-bye workout. Ertz was a full participant in the session and that should put him on track for a return to action against the Cowboys next Sunday night.

Ertz should have some company among returning players. Cornerback Ronald Darby has not played since dislocating his ankle in the opener, but has been practicing for a couple of weeks and worked with the first team on Monday. Darby joined the Eagles shortly before the start of the season in a trade with the Bills and said his time off has helped him digest Jim Schwartz’ scheme.

“Yeah, I learned a lot being hurt,” Darby said. “All you can do is study, for the most part. I learned everything they do on the field. I see it, I understand it.”

The Eagles gained ground on the NFC East while they remained idle because everyone else lost and the two returning players will try to keep the seven-game winning streak rolling in Dallas.