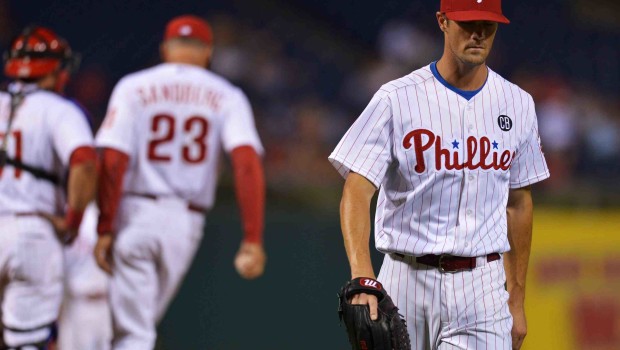 HAMELS AND REVERE GIVE PHILS A WINNING SERIES OVER NATS

Hamels looked perturbed when Sandberg pulled him in the 7th inning.

The Phils managed to win a series from the high-flying Washington Nationals, but they needed high-tech to do so.

With a little help from replay review, Ben Revere actually got a call — and went on to help the Phillies to a 4-3 win over the Nationals on Tuesday night at Citizens Bank Park.

With the game tied at 3, Revere led off the eighth inning with a grounder to short. Ian Desmond’s throw was high, but first-base umpire Gary Cederstrom ruled that Kevin Frandsen held the bag with his right foot. Phillies manager Ryne Sandberg challenged the out call, and after a review of just under three minutes, the umpires ruled that the throw pulled Frandsen off the bag and called Revere safe.

“I was pretty sure I was safe, but I knew it was close,” Revere said. “I kind of snuck a look into the dugout, like, ‘We should try it.’ It was a tough play; he had to rush it.”

“I thought it was a base hit, actually,” said Sandberg. “That was a tough play, for a guy that’s chasing a batting title. That was bang-bang. It was an easy one to look at, and obviously a big play in the game.”

Desmond was charged with an error on the throw.

Revere stole second — his 39th steal of the season — and Jimmy Rollins followed with a fly ball to right field that moved Revere to third. Carlos Ruiz followed with a sacrifice fly to center, and Revere trotted home with the go-ahead run.

“I wanted to take off early,” Revere said. “I thought they might pitch out, but when I figured they were going after [Rollins], I had to get that stolen base. Jimmy came up big, getting me over.”

With Tuesday’s win, the Phillies took a series from an NL East opponent for the first time since sweeping the Braves in Atlanta from June 16-18. The Phillies had lost 29 of 44 games against the NL East since May 11. The Phillies have now won three consecutive series for the first time since June 2-14. They had to overcome a rare stumble by Cole Hamels to do it, and Hamels wasn’t exactly in the mood to discuss it afterward.

Hamels has been one of the best pitchers in baseball the last three months, entering this start with a 1.77 ERA since June 1. He dominated the Nationals for six innings but faltered in the seventh. After giving up two runs and escaping a bases-loaded jam in the seventh, Hamels came back out for the eighth and gave up a game-tying home run to Asdrubal Cabrera. Sandberg immediately came to get him, and Hamels looked agitated on the mound.

Asked if he was upset at himself or at being removed from the game, Hamels said: “I just think it was a good game and we were able to win.”

Asked if that meant he was upset at himself or at being removed from the game, Hamels said: “It was a good game that we won.”

Sandberg, asked about Hamels’ mood, said: “I haven’t talked to him yet.

“Cole cruised for six innings, but he had some problems with location in the seventh. Then he went out in the eighth in a hitter-by-hitter situation. I gave him a verbal [indication that he was hitter-by-hitter]. I don’t think it made a difference. There was some talk about [not letting him pitch the eighth], but sending him out hitter-by-hitter with [Ken] Giles behind him was the route to go.”